“We are serious about electric mobility,” says CEO Zetsche. 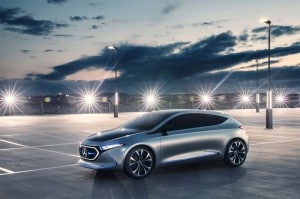 The Mercedes-Benz Concept EQ A is the luxury brand's move toward an all-electric line-up.

By the middle of the coming decade, expect to see some form of battery-based option for every vehicle in the vast Mercedes-Benz line-up, brand boss Dieter Zetsche announced Monday night. And the German automaker is offering a clear indication of the options that strategy will take at this year’s Frankfurt Motor Show.

The German maker’s stand features products as diverse as the new GLC F-Cell, an SUV that combines both a hydrogen fuel-cell system with in plug-in lithium-ion battery pack, and the new AMG Project One, a 1,000 horsepower hypercar using a four-motor plug-in hybrid system based on Formula One’s KERS technology. Both models are debuting in Frankfurt this week.

While all of the traditional Mercedes models will be offered with electrified options, the company also plans to launch an entirely new sub-brand, dubbed Mercedes-EQ, which will deliver 10 pure battery-electric models by the middle of the coming decade. That is likely to include a version of the Concept EQ A hatchback also making its Frankfurt debut.

Though officially called a prototype, for now, “The Mercedes-Benz Concept EQ A proves we are serious about introducing electric mobility throughout the portfolio,” said Zetsche, who also serves as CEO of parent Daimler AG. 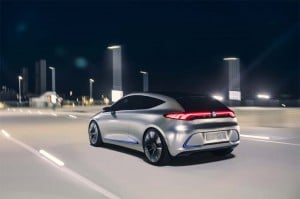 The production version of the EQ A is due to hit the streets in 2020.

The concept is a hatchback roughly the size of the current A-Class model – 168.7 inches in length, with a 107.4-inch wheelbase. It sits 56.2-inches high and has a width of 71.3 inches. Unlike the current A-Class, the EQ A rides on Daimler’s new Modular Electric Architecture, which places its battery pack in the vehicle’s load floor in order to maximize interior space and lower the vehicle’s center of gravity.

Due to market around 2020, the production EQ A is expected to become the second electric model in the new EQ family, following the roll-out of the bigger offering closely based on the Generation EQ unveiled in Paris last year. That model will also use the sort of skateboard platform that is becoming the norm in the EV market.

Despite its compact size, Mercedes claims it will be able to squeeze out as much as 250 miles of driving range – at least with the largest of several optional battery packs. The base pack will have 60 kilowatt-hour capacity, though the carmaker isn’t revealing the size of the largest pack.

The system would be able to use household current, an upgraded Level 2 charger or a high-speed charging system. Mercedes says it could also be fitted with a wireless induction charger. 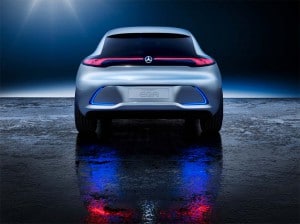 Despite its compact size, Mercedes claims it will be able to squeeze out as much as 250 miles of driving range.

It also is billing the EQ A as a sporty performer, its twin motors developing about 270 horsepower, and 368 pound-feet of near-instant torque to all four wheels. Depending on which program a driver chooses, the system will bias that torque to either the front or rear wheels. Mercedes claims the EQ A can hit 60 in five seconds flat.

Switching modes will also impact the way the vehicle is lit using a network of fiber optic cables. A black panel on the nose of the Concept EQ A replaces the traditional grille. In Sport Mode, the fiber optic system depicts a “flaming” horizontal wing. In Sport Plus mode, it shifts to vertical struts reminiscent of the grille on the Mercedes Panamericana grille.

Inside, the placement of the batteries in the load floor frees up space normally devoted to the engine compartment, offering unexpected room for both passengers and cargo.

Mercedes isn’t the only automaker making major battery-car news in Frankfurt. Rival Volkswagen plans to have 80 plug-based models by 2025 and will also have electrified options for all models by 2030. BMW and Jaguar Land Rover, as well as Volvo, have made similar announcements in recent weeks.