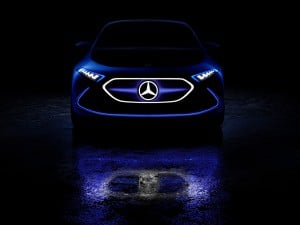 Mercedes continues its expansion of its EV plans with the debut of the Concept EQ A at Frankfurt.

A year after announcing plans to launch an all-new sub-brand dedicated to battery-electric vehicles, Mercedes-Benz will charge into the Frankfurt Motor Show next week with the Concept EQ A, a long-range EV set to go up against the likes of the Tesla Model 3 and Chevrolet Bolt.

The debut of the Concept EQ A follows the preview of the original Generation EQ Concept at last year’s Paris Motor Show and underscores the breadth of the battery-electric line-up the German maker plans to roll out under the Mercedes-EQ badge. In all, at least 10 BEVs are scheduled to reach market by 2025, according to Dieter Zetsche, head of the Mercedes brand and CEO of parent Daimler AG.

The production version of the EQA hatchback, meanwhile, will be part of a wave of new small cars Mercedes is planning, including a compact crossover expected to be called the GLB, as well as updated and all-new versions of current models like the Mercedes-Benz A- and B-Class models.

Mercedes isn’t saying much about the EQ A, nor tipping its hand on production plans. It’s expected to be a hatchback of roughly the size of the current A-Class model. But whether they will share many, indeed, any of their underlying components is unclear.

What is known is that the electric model will ride on Daimler’s new Modular Electric Architecture, which places its battery pack in the vehicle’s load floor in order to maximize interior space and lower the vehicle’s center of gravity.

Another question is whether Mercedes will market the little electric as primarily just an urban green machine, in line with what BMW has done with its i3. The Bavarian battery car is about to get a major makeover for 2018, but it will see only a modest increase in its range of around 100 miles. That’s barely half of what both the Tesla Model 3 and the Chevrolet Bolt can deliver on a charge.

Due to market around 2020, the production EQ A is expected to become the second electric model in the new EQ family, following the roll-out of the bigger offering closely based on the Generation EQ unveiled in Paris last year. That model will also use the sort of skateboard platform that is becoming the norm in the EV market, but it will all but certainly deliver range in line with what Tesla is planning – the California EV maker planning a 300-mile optional battery pack for the Model 3 and already offering that sort of range with the Model S P100d. 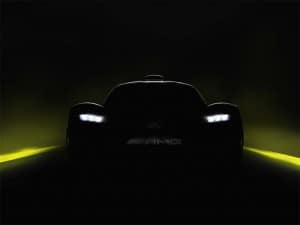 Like its German competitors, Mercedes was initially slow to embrace electric propulsion, but it is rapidly shifting direction. That reflects several factors. For one thing, the diesels that make up a fair share of its line-up are losing steam in the wake of the Volkswagen emissions scam. And a growing number of countries are planning to ban internal combustion power entirely during the next decade or so. The list already includes Norway, Great Britain and India, with France and even Germany expected to make a similar move.

China, a key Mercedes market, is also pressing makers to shift more and more to battery power in its push to cope with endemic air pollution problems.

While Mercedes will be spending much of its time in the spotlight at the Frankfurt Motor Show showcasing smaller and greener models, it isn’t entirely walking away from its more traditional focus. One of the most eagerly awaited debuts next week will mark the unveiling of the new Project One supercar.

(To see more about the Mercedes Project One, Click Here.)

But even there, Mercedes is taking a green approach to performance, the hypercar relying on a unique four-motor hybrid electric drive system lifting key technologies from the company’s dominant Formula One program.