Smart will go all-electric in U.S., Europe by 2020, with other markets to follow. 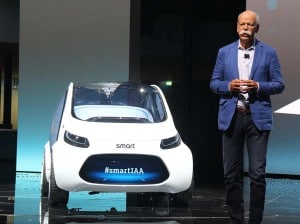 With its butterfly doors, a complete lack of steering wheel and other controls, and a lithium-ion battery pack tucked neatly below the floor, the Smart Vision EQ Fortwo Concept that made its debut at the Frankfurt Motor Show Monday night is designed to give us a glimpse of the future. But that may not be nearly as far off as it might seem.

By most forecasts, we’re likely to see the first real autonomous vehicles start rolling into showrooms by 2020, and several automakers are promising to build their first completely driverless models before mid-decade.

As for Smart, “by the end of this decade,” declared Dieter Zetsche, CEO of the Smart brand’s parent, Daimler AG, “we will switch the Smart brand in Europe and the U.S. to completely electric drive, and the rest of the world will follow.”

In fact, Smart has already laid out plans to drop the gas-powered version of its little Fortwo model in the U.S. this coming year, so the Frankfurt announcement was not entirely unexpected. And it comes as part of a broader move by Daimler, Zetsche announced Monday night, that will see the German maker offer at least one form of electrified drivetrain – whether hybrid, plug-in or pure battery-electric – “for our entire line-up…by 2022.” 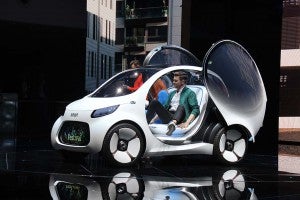 The Smart line-up will be converted completely to electric-only models in the next few years.

Seeing the Smart brand take a lead role for Daimler is no surprise considering the market it targets. While there are a handful of suburban eccentrics who can be found hustling off to the mall in one of the two-seaters, Smart products primarily target those who live in dense urban environments. And that could put a production version of the Vision EQ Fortwo Concept at the center of the dramatic changes many expect to transfer the world of transportation over the coming decade.

“The Smart Vision EQ Fortwo is our vision of future urban mobility; it is the most radical car sharing concept car of all: fully autonomous, with maximum communication capabilities, friendly, comprehensively personalizable and, of course, electric,” said Smart CEO Annette Winkler. “With the smart vision EQ fortwo, we are giving a face to the themes with which Mercedes-Benz Cars describes the vision of future mobility within the CASE strategy.”

“CASE” is Daimler’s shorthand for: 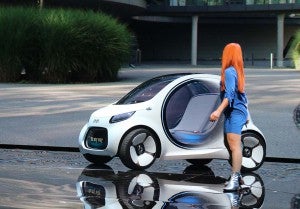 The Smart Vision EQ Fortwo picks up a passenger at the Frankfurt Motor Show.

During its rollout of the Vision EQ Concept, Smart borrowed a page from a Broadway musical to outline the sort of world in which a production version might one day operate. A large number of city dwellers will no longer own vehicles. Instead, they will summon a vehicle using a smartphone app. They will be in constant motion, said Zetsche, “swarming” around areas where algorithms show they might be needed. That approach will cut waiting times – as well as traffic. It will drive down costs and, of course, there will be no need to worry about parking.

Smart is already putting a large number of its vehicles into car-sharing programs, such as the urban-centric car-to-go. But it still depends on retail buyers, as well. And there are more than a few skeptics who question the switch to battery power alone.

“There’s be some markets for that, especially in dense urban centers,” said Joe Phillippi, of AutoTrends Consulting, but he questions if other buyers will settle for getting less than 100 miles per charge – especially as other manufacturers, such as Tesla and General Motors, expand their range to 200 miles or more.

Tesla may need a very different business model, he said, if it expects to make its switch to battery power pay off.