Consumer Reports Weighs in on Best Vehicles, Brands to Buy

Toyota once again dominates the list of vehicles recommended by Consumer Reports in its annual Top Picks Cars & Trucks list, though Mazda surged to the top in the brand rankings also released by the influential organization on Thursday.

This year’s study offers up a number of surprises. First, two Detroit brands landed in the top-10 rankings. Tesla managed to win a Top Pick endorsement for its Model 3 sedan, even though its overall line-up has some of the worst quality problems in the industry.

“Fortunately, consumers will find they have many options that are safe, enjoyable, and reasonably priced,” said Fisher, who spoke to TheDetroitBureau.com by Zoom ahead of the official release of the latest studies.

Toyota lands the most Top Picks 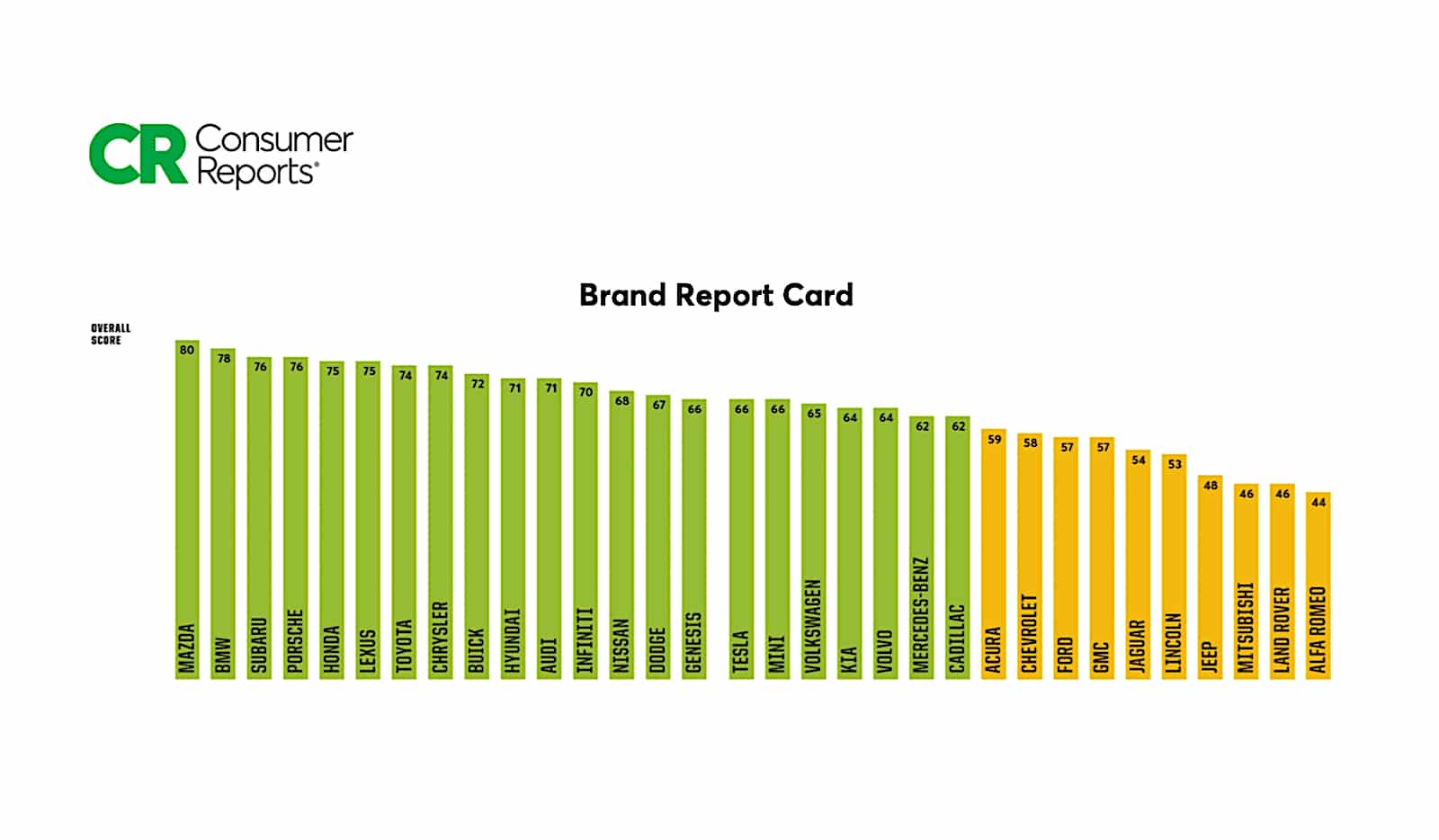 Toyota dominates CR’s Top Picks list with three of the 10 recommended models – four if you factor in Lexus. These include the Corolla sedan in the Small Car category, the Prius among Hybrids, the Camry as the top Midsize Car and the Lexus RX as the top Midsize SUV in the premium category

But the industry leader has some competition from Subaru. The smaller brand had two top-10 picks: the Forester as Small SUV and the Outback in the SUV/Wagon category.

Mazda, Honda, Kia and Tesla were the other brands with Top Picks.

The win by the Model 3 in the Electric Cars category likely won’t surprise the legions of loyal Tesla fans. But the fact that the California-based automaker fared poorly in the overall Brand Report Card offers a cautionary note. The fact is that Consumer Reports officials have been harshly critical of Tesla overall. The new Model Y SUV, they’ve noted, has suffered from reports of paint defects and issues like rear seats not properly bolted into place.

“Unfortunately, we’re seeing a lot of problems” with some Tesla products, said Fisher.  But with “the Model 3, by keeping at it, it’s become their most reliable product.”

Tesla slid five spots on the brand list this year and would have sunk even lower if not for what CR described as the “incredibly high customer satisfaction scores” among its owners.

Quality and reliability are two key elements weighed into CR’s Top Picks. But the consumer group also factors in results of testing at its expansive facility in Connecticut while considering the features a vehicle offers. And there’s the question of the value you get for your money, which helps explain why luxury brands don’t dominate.

In terms of the other study released today, CR top five brands are Mazda, BMW, Subaru, Porsche and Honda. Alfa Romeo was at the other end of the scale, named the absolute lowest-scoring brand. It was followed, in ascending order, by Land Rover, Mitsubishi, Jeep and Lincoln.

Lincoln tumbled sharply this year, down 10 places among the 32 brands rated by CR. That reflects “a profusion of new products,” said Fisher, some of which experienced quality snags as they first rolled into showrooms.

Two Korean brands ran into similar setbacks, Kia tumbling 10 places, Genesis by 13. The luxury brand had been one of the top-ranked marques a year ago. Fisher cautioned it could take time for Genesis to work the bugs out of new models like the G80 sedan which are loaded with lots of new technologies.

Chrysler and Buick scored in the top 10, among the surprises in the 2021 brand report. This marks only the second time two domestic marques landed so high up the chart at the same time.

Buick did well in another report released Thursday, the J.D. Power Vehicle Dependability Study, or VDS. That was no surprise, said Fisher, noting that Buick “is really the import division at General Motors. Many of its products were launched elsewhere first (often in China). They got the bugs worked out before entering the U.S. market.”

While CR and Power agreed on a number of topics – the VDS also listing Alfa Romeo, Land Rover and Jaguar as brands with serious problems – they disagreed on a number of other products and brands. For one thing, the Power study lists Lexus, Porsche, Kia, Toyota and Buick as its top five brands. And it continues to rank Lincoln high, while Chrysler falls to the bottom in the VDS.

Why so many disagreements between? There are distinct differences in methodology. Most notably, Power focuses all but exclusively on the number of problems owners reported on three-year-old vehicles. CR does consider long-term quality and reliability but also weighs in test results on new models while considering features such as advanced safety technologies.