If you’re a James Bond fan, the ejector seat is standard equipment for Aston Martin (or BMW depending upon the movie); however, the driver a Tesla Model Y must have thought they were the next bond when the glass roof on their ute flew off.

According to The Verge, Nathaniel Galicia Chien was driving his brand new Model Y on the freeway, just hours after collecting it from the Tesla store in Dublin, California, when the breeze in the car got a bit louder.

“I thought a window was open,” Chien told The Verge in an email, “but half a minute later the entire glass top of the roof just flew off in the wind.”

He noted fit-and-finish problems with his new Model Y but, according to the story, Chien chalked them up to the usual things he’d heard about new Tesla vehicles and assumed they’d get resolved in the weeks ahead.

However, he wasn’t expecting to get a permanent convertible option ­– would Elon Musk call that “Bond Mode?” – for his new utility vehicle. Fortunately, no one was hurt in the incident, which occurred on Interstate 580. Chien took the vehicle back to the store where the service department offered to replace the roof at no charge and put him in a rental while waiting for the repair.

The Chien family declined the offer and are likely to buy a different vehicle from another brand.

(Tesla speaking truth about its power at Battery Day.)

Tesla’s innovation and fun features have been offset by the many quality issues plaguing its vehicles. It routinely fared poorly in quality studies. The EV maker does have a system in place to address the issues, but the wait time to get issues fixed. 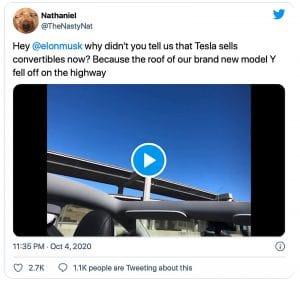 It frustrates many first-time Tesla buyers because these problems are uncommon for conventional automakers. Many Tesla buyers understand going in that panel gaps or paint overspray or lack of spray are most likely going to be present. However, they’re willing to overlook it for the performance of the vehicle as well as other features unique to the vehicles.

TheDetroitBureau.com test drove a Model Y earlier this year, and after going through the vehicle very closely found it free of the fit-and-finish problems so often chronicled on the internet. Luckily, despite our best efforts, we couldn’t drive fast enough, apparently, to make the roof fly off.