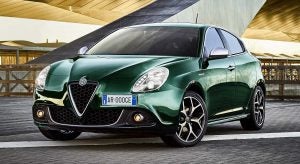 Alfa Romeo appears to be ready to pull the plug on its Giulietta hatchback in Europe as sales continue to decline.

Fiat Chrysler Automobiles N.V. is apparently taking another step away from the passenger car market.

The Italian-American automaker, like its Detroit-based rivals General Motors and Ford, has taken steps to move away from passenger cars to focus on more profitable utility vehicles in the North American market.

Now FCA is moving away from passenger cars in Europe as well as demand is on the decline, according to reports circulating in Italy.

The Italian automotive media is reporting that FCA is preparing to end production of the Giulietta hatchback, perhaps as soon as this spring. The hatch is the brand’s competitor for the Audi A3.

Alfa Romeo has been winding down daily production of the Giulietta, CarScoops.com reports, at its Cassino, Italy plant to between 70 and 40 vehicles. The demand for the hatch has been falling at an increasing rate.

Additionally, cutting the Alfa Romeo Giulietta would free up more room at the plant, as FCA 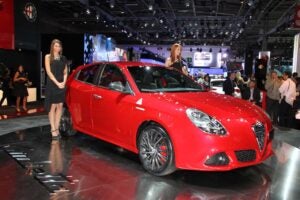 Alfa hoped to make an American comeback with models like the Giulietta, seen here making its debut at the 2010 Paris Motor Show.

need the space freed by the move to build the upcoming Giorgio-based Maserati SUV. The Maserati SUV will be the brand’s second utility offering, smaller than the Levante.

The Italian press also reports the future looks pretty bleak for the Italian compact hatchback, as Alfa Romeo continues to struggle with sales as a whole. Right now, the model isn’t expected to get a successor, with the brand focusing instead on the production version of the Tonale SUV.

According to the company’s latest production plans, Alfa Romeo is going to launch another SUV model in 2022. The B-segment ute will compete with the Audi Q2 and the Mercedes-Benz GLA in Europe.

Offering three sport-utility vehicles may help Alfa’s bottom line in the long term, but expanding that line-up comes at the expense of the entry-level Giulietta hatchback — despite the European market still seeing most hatches in a positive light.

Alfa Romeo introduced the Giulietta hatch in Europe in 2010. It’s had two makeovers – 2014 and 2016 – and was updated again for the 2019 model year as the brand attempted to keep it appealing for buyers. The pending merger of FCA and PSA could also play a role in the elimination of the slow-selling hatchback.