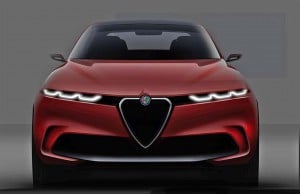 Named after one of the most famous passes through the Italian side of the Alps, the Alfa Romeo Tonale provides a vista into the future of the brand as it both expands its line-up of SUVs and begins rolling out an array of battery-based vehicles.

Though the model that debuted today at the Geneva Motor Show is officially just a concept, the Jeep Renegade-sized crossover will soon join the Alfa line-up as a more compact alternative to the brand’s current Stelvio model.

“The Tonale embodies the adventure potential of a mid-size, dynamic sport utility vehicle capable of guaranteeing the adrenaline of sporty driving, inherent in the legend of the brand, in urban settings with the same ease,” Alfa said in a statement accompanying the launch of the concept vehicle. “The hum of the electric motor accompanies the genuinely Alfa Romeo roar creating an efficient, exciting synergy at the service of driving pleasure. 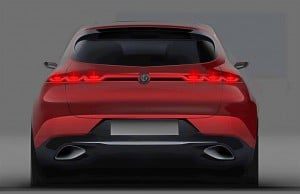 The Tonale shares the same, underlying architecture as the Jeep Renegade.

While Alfa is billing the Tonale as a plug-in hybrid, it is offering no specifications. But one might get a sense of what’s in store by noting another announcement parent FCA made last month when it revealed plans to develop four new plug-in hybrids for Alfa’s sibling, the Jeep brand. The underlying drivetrain will all but certainly be shared between the two, though there will likely be some modest tweaks in how they are tuned in order to match the differences between Alfa and Jeep brand DNA.

The plug-in hybrid driveline will all but certainly be one of several options available for the Alfa Romeo Tonale, with gas and diesel packages also on the list. The question is how the Italian marque will position the PHEV version. Last autumn, Tim Kuniskis, the brand boss for both Alfa and Maserati, suggested in an interview with TheDetroitBureau.com that there will be a powertrain hierarchy, with PHEVs at the top of the performance ladder.

The Tonale clearly picks up on some of the key design cues of the Stelvio, Alfa’s first-ever SUV. It boasts a strong face with three-bulb headlamps, the iconic triangular grille and an unusually long front overhang. A steeply raked windshield flows into a coupe-like roofline and a chopped rear end.

Gas and diesel powertrain options will also be offered once the production Tonale debuts.

Alfa is expected to become one of the global volume brands for Fiat Chrysler, based on the latest five-year plan the late Marchionne revealed at an event in Milan last June. But the strategy now calls for a shift away from coupes and sedans, such as the Giulia, to put more emphasis on utility vehicles going forward.

While the 2019 Geneva Motor Show is more quiet than in recent years, Alfa has a strong presence at the PALExpo convention center. That includes “Alfa Romeo Racing” special editions of both the Giulia sedan and the Stelvio Quadrifoglio SUV that were developed in a partnership with Sauber Engineering.