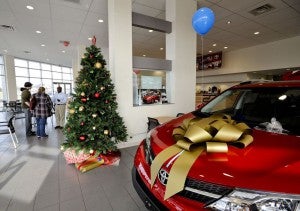 Toyota is one of the top sellers in December, trailing only Ford and Chevrolet for capturing end-of-the-year buyers.

It appears that Lexus, Mercedes-Benz, GMC and other automakers have lashed enough giant red bows to vehicles in December to change the shopping habits of new vehicle buyers as 60% of carmakers now see December as their biggest sales month of the year.

Typically, there was a rush at the end of summer, i.e. August, when the new vehicles switched over to the new model year to drive sales; however, as automakers wanted ways to clear their dealer lots of old calendar year inventory the new car as a gift became a standard in the advertising rotation on U.S. television screens.

December tends to be the biggest month for car sales, as the top brands sell a combined average of almost 1.7 million vehicles in December, according to research done by ValuePenguin.com, an investing information website.

But some brands have much larger sales than others during the holiday season. In fact, the research reveals that top five brands that people buy in December are – stunningly – the big advertisers. Whether people are buying it for themselves or as a gift for another, Ford, Chevrolet, Toyota, Honda and Nissan rank as the brands most likely to show up in people’s driveways this month, the website revealed.

Some brands rely on December sales more than others, as they make up the largest share of their annual sales. While none of these automakers were among the top five in total December sales, it was the holiday season that helped to make for a happy new year.

Luxury vehicle brands seem to especially rely on December sales, with the holiday season being their biggest month for many of them.

December makes up the biggest share of annual sales for the following brands: Lexus, Infiniti, Cadillac, Volvo and Land Rover. In fact, ValuePenguin determined no brand enjoys December than Lexus. In recent Decembers, Lexus has sold 38,387 cars on average, a whopping 44% bump from other months. For comparative purposes, among the 29 sample brands, the average difference in vehicles sold between a peak month and a typical month for a given brand was 24%.

It’s not just clever advertising that suddenly turns buyers on to the possibility of rushing their local dealership. According to Edmunds.com, December is the month with the most incentives and the highest average discount off MSRP: 6.1%. Incentives may include low APR financing and lease specials.