Company hints it’s “evolving beyond a car company to become a tech-driven brand.” 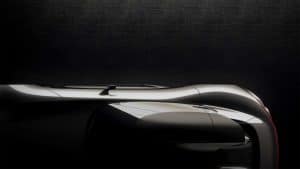 Karma teases the SC2 Concept coming to the L.A. Auto Show next week.

Karma Automotive – the phoenix-like resurrection of the original Fisker Automotive – has been struggling to get itself taking seriously. And it will continue that process during the L.A. Auto Show next week with the global debut of two new products.

The pair includes a high-performance version of its only current production model, the Revero GTS getting a bigger battery and significantly better performance than the current plug-in hybrid. It will be joined on stage by the Karma SC2 Concept – which is expected to bring us a hardtop version of the SC1 prototype unveiled this past August at the Pebble Beach Concours d’Elegance.

A Nov. 19 preview – a day ahead of the official L.A. show media event – also will see the company “provide more insight about its business strategy comprised of a tech-focused ecosystem designed to significantly add value to the brand beyond retail sales alone,” it said in a news release. 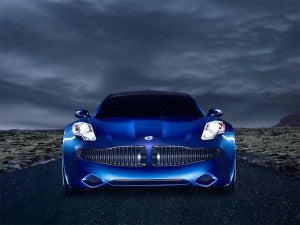 The Karma Revero GTS will deliver the sort of power and performance numbers the sleek design has long promised.

For those who haven’t been following the company’s ups-and-downs, the original Fisker Automotive brought to market its Karma PHEV about the same time Tesla introduced the Model S.

But the company, launched by Danish auto designer Henrik Fisker, ran into a spate of bad luck and, barely two years later, its assets were auctioned out of bankruptcy to the Wanxiang Group.

The Chinese firm renamed the California enterprise Karma Automotive and, to further add to the confusion, the original Karma plug-in became the Revero. Brought to market late in 2016, it has so undergone relatively modest updates to its exterior and interior, as well as the original powertrain which paired a modest battery pack with a four-cylinder General Motors powertrain.

But Karma is getting ready to make some major upgrades with the GTS which will swap out the GM package for a 1.5-liter, three-cylinder range-extending gas engine derived from BMW. The original, 21.4 kilowatt-hour battery pack also will be replaced with a 28 kWh lithium-ion package. That will boost electric-only range from 50 to 61 miles – not much less than what some first-generation all-electric products, like Mitsubishi’s i-MiEV could manage. 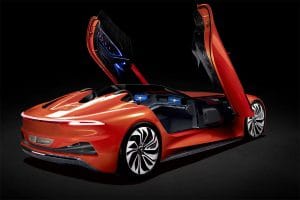 But, if anything, performance should be handily increased, the Karma Revero GTS expected to make 535 horsepower and 550 pound-feet of torque — enough to launch from 0 to 60 in as little as 3.9 seconds, the company claims. The most sporty version of the Karma currently available, the GTS, was running that sprint in around 4.5 seconds.

That’s not quite Model S with Ludicrous mode, but it should satisfy a lot more buyers by managing the sort of numbers the coupe’s body has always promised. Meanwhile, total range, combining EV and gas modes, will jump to 360 miles, according to Karma.

As for the SC2, well, the teaser image the automaker is providing us doesn’t reveal very much, but it’s not hard to guess what we’ll see considering the automaker has confided it will be an “evolution of the dramatic SC1 Vision Concept.” Expect that to mean a hardtop version of the Pininfarina-designed two-seater.

But in Los Angeles we may learn more than just what new products Karma is working on. “Karma is evolving beyond a car company to become a tech-driven brand equally focused on being an important engineering, design, customization resource, and high-tech incubator to others,” The company’s CEO  Lance Zhou, said in a teaser of the SC2.