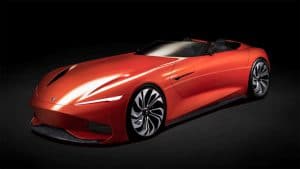 The Karma SC1 gives some insight into the all-electric future of the now Chinese-owned brand.

Karma, the automotive phoenix that rose from the ashes of the failed Fisker Automotive,has been struggling to get by with a lightly updated version of Fisker’s original plug-in hybrid, now rebadged the Revero.

That said, the now Chinese-owned automaker has been giving us hints of what soon could follow. That includes not only a more significantly updated version of the Revero plug-in, but the all-electric Karma SC1 Vision Concept that debuted at Auto Shanghai earlier this year – and which will make its first North American Appearance at the Pebble Beach Concours d’Elegance next weekend.

“The SC1 is a signpost to Karma’s future,” said Karma CEO Dr. Lance Zhou. “Designed and engineered in less than 12 months, SC1 is a full battery electric vehicle that explores the brand’s striking design language and the innovative technology integration possible through our collaborative Open Platform strategy.” 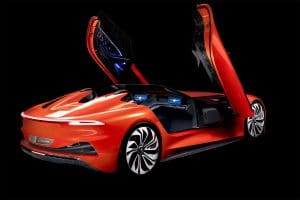 Looking like it could have popped out of a videogame like Gran Turismo, the SC1 Vision is a scissor-doored roadster that foregoes the cab-forward design language that many expect to dominate the electric vehicle market in the years to come. Instead, it features an impossibly long hood and a short rear deck with buttresses that include the built-in headrests.

Other distinctive features include the low roof, the frameless windshield and massive wheels shod in low-profile tires.

According to several videos on the Karma website, the design was strongly influenced by the Hughes H-1 racing aircraft of the 1930s. That said, while the overall look is classic GT, there’s really nothing retro about the SC1. 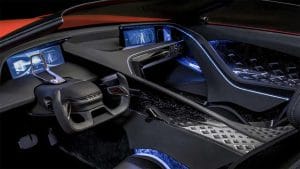 Inside, there’s a very high-tech cabin with twin video screens, one for the driver and another for the passenger. In keeping with the aircraft influence, there’s more of a yoke than a real steering wheel. Meanwhile, the cabin is neatly divided into two sections. There’s a distinctively exotic touch to the materials Karma designers have opted for, with the diamond patterns found on the original Karma Revero blended into the cabin in a variety of places.

Karma recently announced that the Revero will abandon its original, GM-supplied range-extending engine for a small BMW powerplant. But, moving forward, the company will be moving towards pure battery-electric propulsion. That’s what it has in mind with the SC1, though it has released no specifics about the powertrain, including the size of its battery pack, how many motors it would use and where they’d be mounted. 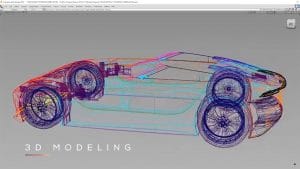 A digital rendering offers hints of the all-electric driveline’s technology.

What we do know is that there are plenty of high-tech features beyond those twin screens, The SC1 features 5G connectivity and can read commands not only by touch and gesture but even by reading what occupants are looking at.

“The eye-tracking system monitors a driver’s irises, eyelids and gaze – should the driver become distracted or fatigued, AI safely takes control of the vehicle,” Karma said in a statement. Its autonomous driving system, meanwhile, relies on “eight radars, six Lidar sensors, and half dozen external cameras,”

The eye-tracking system also can identify the driver and passengers for both security purposes and to adjust individual vehicle settings.

The Karma SC1 Vision Concept will make its North American debut on Sunday, August 18 on the concept lawn at the Lodge during the annual Pebble Beach Concours d’Elegance.