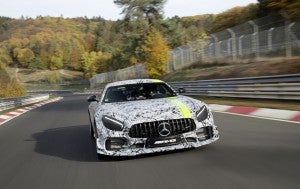 Mercedes-Benz Cars will be making a big splash at the Los Angeles International Auto Show with the world premiere of two race cars: the Mercedes-AMG GTR Pro and Mercedes-AMG GT.

The update of the AMG GT series includes modifications to the exterior and interior that emphasize the close relationship to the 4-door AMG GT Coupé, Mercedes officials noted.

The Mercedes-AMG GT enjoyed a successful year on the racing circuit. It began its year with a win at the 24-hour race at Dubai, the performance brand from Affalterbach scored its second season win in the 12-hour race at Silverstone, the opening round of the 2018 24H GT Series European Championship. 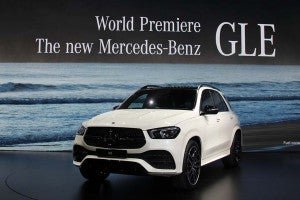 The 2020 Mercedes-Benz GLE will make its American debut at the L.A. Auto Show.

But Mercedes is searching for wins in the showroom with the new version of the AMG GT. To that end, the new model offers two race-inspired powerplants: a 4.0-liter V8 biturbo in two output stages with 585 horsepower and 639 hp.

The 48-volt on-board electrical system and the hybrid functions boost, recuperation, load-point shifting, gliding and engine restarting in conjunction with the ECO start/stop function. The company is introducing a couple of new vehicles to the U.S. public as well.

The new Mercedes-Benz GLE will celebrate its public premiere in the U.S. as well in Los Angeles. With its innovative 48 V suspension and the fully variable MATIC all-wheel drive available for the first time (from six-cylinder variants upwards).

It’s designed provide luxury comfort on tarmac, while retaining its off-road capabilities — a combination few brands present and is now standard for Mercedes.

The new A-Class also takes a bow in the U.S. for the first time, marking the entry of Mercedes-Benz of America into a new market segment.