New model gets a combined range of 300 miles. 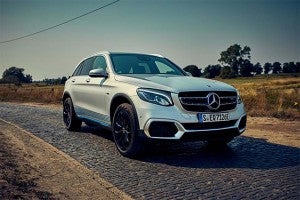 The new Mercedes-Benz GLC F-Cell is designed to help motorists address one of the biggest problems facing alternative powertrain technology: a lack of infrastructure.

The new crossover is the world’s first production vehicle to combine fuel-cell and plug-in hybrid technology in the same vehicle. That means a motorist will be less likely to be stuck somewhere without a source of power.

“The innovative plug-in fuel cell drive combines the advantages of both zero-emission drive technologies and, thanks to its intelligent operating strategy, continuously optimizes the use of both energy sources in line with the current operating situation,” Mercedes said in a statement announcing the launch of the new F-Cell, which will officially go on sale in Germany next spring.

Hydrogen fuel-cells can be thought of as “refillable batteries.” They feed hydrogen gas through a stack containing membranes coated with platinum and other catalytic materials. The gas combines with oxygen from the air to produce both water vapor and a flow of current that, in turn, can operate a vehicle’s electric motors. 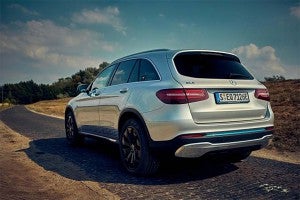 The F-Cell stores 4.4 kilograms of hydrogen in two carbon-fiber-wrapped tanks. That’s enough to propel the crossover 467 kilometers, or about 270 miles, based on the European fuel economy test standards.

Most of the fuel-cell vehicles currently on the road, such as the Honda Clarity FCX and Toyota Mirai, come with small battery packs to capture energy lost during braking and coasting. That helps boost both range and performance.

In the case of the F-Cell, however, the lithium-ion pack is upsized, providing enough additional capacity to travel 51kilometers, or about 32 miles, in all-electric mode. 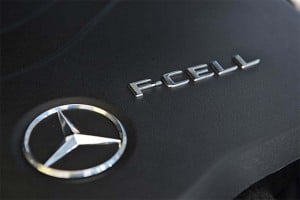 The new F-Cell can be driven in one of four modes, depending upon the drivers needs at the moment.

* In Hybrid Mode, it draws power, as needed at any particular moment, from both the fuel-cell stack and the battery;

* In Battery Mode, the fuel-cell system is idled and the F-Cell operates solely on the pack’s power;

* Charge Mode combines power from both sources but puts an emphasis on keeping the battery fully charged.

The F-Cell itself is based on the familiar Mercedes GLC crossover-utility vehicle, modified to use electric motors and squeeze in both a battery pack and the hydrogen storage tanks.

The combination of sources could help a driver overcome the lack of a solid alternative power infrastructure. There are a growing number of electric charging stations in Germany and other markets where the F-Cell might later be launched. Finding hydrogen is a bit more tricky, one reason the automaker plans to offer the new model for sale only in “major cities which are already comparatively well equipped with hydrogen filling stations,” it explained, “such as Stuttgart, Dusseldorf, Berlin, Hamburg, Frankfurt, Munich and Cologne.” 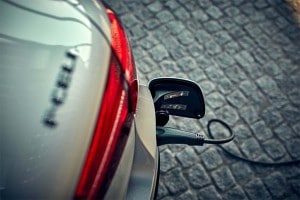 The F-Cell can travel 32 miles in electric-only model.

Germany has laid out plans to establish a cross-country network of hydrogen stations, though the project is expected to take a number of years to complete.

In the U.S., automakers including Honda, Toyota and Hyundai offer their own hydrogen models only in limited areas within California due to a lack of infrastructure. That state has also laid out plans to create a broad network of filling stations by early in the coming decade.

For the time being, Mercedes says the GLC F-Cell will only be rented out to its German customers, with the first set for delivery next spring.