$1.6 billion “Track25” project to include successor to McLaren P1 hypercar, with all models using hybrid drivelines. 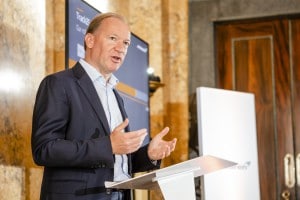 McLaren CEO Mike Flewitt talks through the details of "Track25," the company's product plans until 2025.

McLaren is doing more than just smoking up the track at the Goodwood Festival of Speed this week. The British supercar company is also lifting the covers on what would become the most aggressive product program in its history.

Dubbed “Track25,” it will see McLaren invest £1.2 billion, or about $1.6 billion, to bring 18 all-new models and derivatives to market by 2025. That list will include a next-generation “successor: to the company’s P1 hypercar.

But perhaps the most significant element of the announcement was the decision by McLaren to equip all of its future sports car and supercars with hybrid drivetrains. The P1, of which 375 was produced between 2013 and 2015, was the first electrified McLaren, relying on a hybrid system borrowed from the company’s Formula One racing technology.

(McLaren fills in holds on new Longtail’s story at Goodwood. Click Here for the story.) 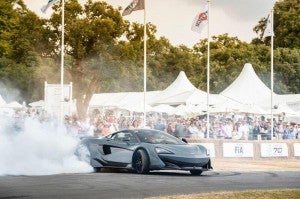 The new McLaren 600LT makes an impression at the Goodwood Festival of Speed.

“We are a luxury brand that is committed to investing in innovation, whether that’s in the development and manufacture of our own carbon fiber tubs as part of a new £50m British-based production center, new powertrains with our entire range due to be hybrid by 2025 or the deployment of technology to enhance the driving and owning experience.”

To enhance the driving side of the experience, McLaren officials said they are evaluating “augmentation” technology, though they didn’t explain precisely what that might be, but other carmakers have shown prototype systems that could, for example, project the best line around a race track onto the vehicle’s windshield.

There’ll be plenty of new technology in the drivetrain when the new models hit market. It’s unclear if there will be a single hybrid system, but McLaren expects to benefit from the significant improvements being made in battery technology to expand range and shorten charging times.

That could include the ability to drive flat out on battery power alone for as much as 30 minutes on a track. Models coming to market towards the end of the Track25 plan might be able to use the next-generation solid-state batteries that many expect will become commercially viable by mid-decade. 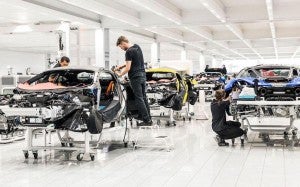 The production line at McLaren might need to be expanded to account for the 6,000 vehicles it plans to produce annually.

McLaren has grown rapidly in recent years, sorting its products into three distinct ranges that could be described as fast, faster and oh-my-god. The latter includes the brand’s latest hypercar, the Senna. Part of the McLaren Ultimate Series, it was named to honor Formula 1-winning McLaren driver Ayrton Senna. The company is already working on another hypercar, the BP23, which will use an unusual, three-seat layout like the original McLaren street car, the F1.

The next-gen P1 is expected to push the envelope even further.

All told, McLaren has big expectations on the sales front, as well, with the new line-up aimed at boosting annual global sales to 6,000 vehicles, or about 75% more than current volume.

(McLaren reaches into its past for newest model. Click Here for the story.)

As with today’s line-up, however, all will rely on carbon fiber technology and all will continue to be hand-built.