McLaren Reaches into Past for Newest Model: 600LT 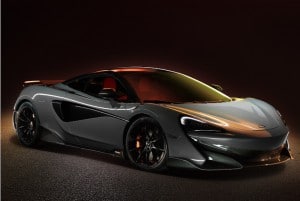 McLaren unveiled the new 600LT, only the fourth Longtail in company history.

McLaren continues to tickle the fancy of McLaren and super car fans alike, this time reaching back into its history a bit with the debut of the new 600LT.

The newest model is just the fourth car in the company’s history with the LT, or Longtail, moniker in its history following the McLaren F1 GTR ‘Longtail’ race car and McLaren 675LT Coupé and Spider

The Longtail designation is designed for vehicles that are at home on the road as well as the racetrack featuring Increased power, reduced weight, optimized aerodynamics, absolute driver engagement, track-focused dynamics and limited availability, according to McLaren.

The British car maker’s latest offering boasts a 3.8-liter twin-turbo V8 putting out 592 horsepower and 457 foot-pounds of torque. The power is certainly there, but it also bears the hallmark looks of the classic longtail designs as well. 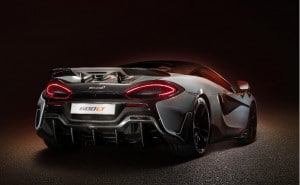 It’s 74mm longer, it also has an extended front splitter, lengthened rear diffuser and fixed rear wing. Nearly a quarter of the parts on the 600LT are different from the standard 570S Coupé. In many cases, this has helped make for a lighter vehicle.

Unique top-exit exhausts ensure that the new LT model has a distinct aesthetic appearance that identifies it as something particularly special, as well as delivering a substantial weight saving and an incredible aural experience.

“The McLaren 600LT is only the fourth ‘Longtail’ McLaren in more than two decades. The McLaren F1 GTR ‘Longtail’ that began the lineage was one of the purest race cars in modern motorsport history,” said Mike Flewitt, chief executive officer, McLaren Automotive. 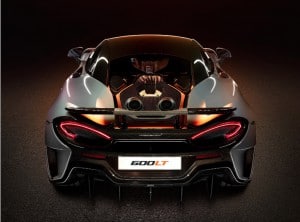 The newest Longtail is lighter and longer than other McLaren coupes.

“The 675LT resurrected the revered name, creating the purest distillation of the sheer driving pleasure embodied by all McLaren cars. Now we are further extending our very special LT family – albeit in limited numbers – and once again showcasing the ethos of optimized aerodynamics, increased power, reduced weight, track-focused dynamics and enhanced driver engagement that are the hallmarks of a McLaren ‘Longtail.’”

The last Longtail models sold out quickly. In fact, the 675LT Spider was created to satisify the overwhelming response to the coupe. The company limited production of the Spider to 500 units. That’s going to happen with the new 600LT as well.

Production of the 600LT Coupé will begin in October 2018 and last for around 12 months, with build slots scheduled around existing Sports and Super Series models, as well as the sell-out Senna, Senna GTR and BP23. The specialist carbon fibre body panels of the 600LT will also ensure that it is significantly rarer than its Sports Series brethren.

(To see why the new Senna is McLaren’s most extreme machine yet, Click Here.)

Like its 675LT predecessors, each 600LT will be hand-assembled at the McLaren Production Centre in Woking, Surrey. Available to order now from McLaren retailers – subject to availability – the McLaren 600LT Coupé is priced from £185,500, or about $245,000, with taxes (UK), which includes a Pure McLaren Road Owner Track Day at a race circuit, with expert driving tuition.