Companies kicking off program in Pittsburgh. 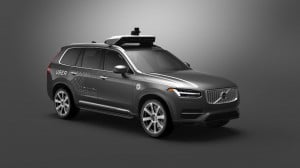 If you’re looking for a ride home from an early season Pittsburgh Steelers game and looking for a new experience, try using Uber. Not the regular Uber, but the self-driving Uber, and for while, it’ll be free.

That’s right, starting this fall, Uber is allowing its users to call for rides in autonomous vehicles. The program, which will be limited to Pittsburgh, features Volvo XC90s that have humans behind the wheel … they just don’t use it.

The specially outfitted Volvo sport utes are laden with sensors, cameras, radar and GPS receivers to help the vehicle navigate the streets of the Steel City. While there are currently just a few of the vehicles roaming the streets there are scheduled to be 100 by the end of this year, according to reports.

Volvo and Uber are collaborating on an autonomous car project with both investing $300 million in the project. The plan calls for their joint efforts to produce a “base car” that each company can use for developing and implementing their own autonomous vehicle technologies.

The new base vehicle will be developed on Volvo Cars’ fully modular Scalable Product Architecture (SPA). SPA is one of the most advanced car architectures in the world and is currently used on Volvo Cars’ top-of-the-line multiple award winning XC90 SUV, as well as the S90 premium sedan and V90 premium estate.

“Volvo is a world leader in the development of active safety and autonomous drive technology and possesses an unrivaled safety credibility,” said Håkan Samuelsson, president and chief executive of Volvo Cars, in a statement.

“We are very proud to be the partner of choice for Uber, one of the world’s leading technology companies. This alliance places Volvo at the heart of the current technological revolution in the automotive industry.”

The SPA makes sense, according to Volvo, it will “include all needed safety, redundancy, and new features required to have autonomous vehicles on the road.” This means that the automaker will be able to take what it learns and spread across to other vehicles quickly and at a reasonable cost. These jointly-developed cars will all be built by Volvo, which will then sell the cars to Uber.

The project is underway and providing some early returns. Volvo has begun producing autonomous XC90s for Uber to use in a self-driving fleet, according to Bloomberg, and Uber users will be able to get free rides while accompanied by vehicle “supervisors” in the driver and front passenger seats.

Having the “driver” in the vehicle helps avoid any potentially sticky legal issues while providing a bit of insurance in case a vehicle encounters a problem.

And, of course, one of the primary ideas behind Uber is providing safe transportation for people, making this the perfect partnership for a technology expected to make U.S. roads safer.

“Over 1 million people die in car accidents every year,” said Travis Kalanick, Uber’s chief executive, in a statement. “These are tragedies that self-driving technology can help solve, but we can’t do this alone.

“That’s why our partnership with a great manufacturer like Volvo is so important. Volvo is a leader in vehicle development and best-in-class when it comes to safety. By combining the capabilities of Uber and Volvo we will get to the future faster, together.”