A prototype Ford Fusion Hybrid, complete with cameras, lasers and radar, is already working the streets of Pittsburgh, where Uber is basing its new Advanced Technology Center. But the company’s autonomous vehicle program got underway in earnest a year ago when Uber turned to the old steel town’s Carnegie Mellon University, a pioneer in self-driving technology.

The prototype, Uber said, “looks like it should be driven by a superhero. But this is no movie prop.” Indeed, the company is just the latest in a growing list of firms convinced that autonomous vehicles will become the norm, rather than the exception, in the not-too-distant future.

In fact, Uber CEO Travis Kalanick has openly suggested that his ride-sharing start-up ultimately hopes to replace the tens of thousands of human drivers it currently relies on with completely self-driven cars. Eliminating the person behind the wheel, he has suggested, would radically reduce the cost of a typical ride.

In turn, studies cited during a mobility conference paired with last November’s Los Angeles Auto Show suggested that by bringing down the cost of a ride to the point where it’s competitive with owning a car, many of today’s motorists might simply abandon their own vehicles. 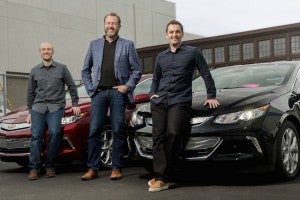 GM and Lyft will begin testing autonomous vehicles in the near future.

There’s a series of big “ifs” to overcome before that can happen, and most industry experts believe that autonomous technology will roll out in stages. Tesla recently launched its AutoPilot system, capable of hands-free driving on well-marked, limited-access roadways. Several other makers, including GM and Nissan, have similar, semi-autonomous systems in the works. Nissan, meanwhile, hopes to have as many as 10 fully autonomous vehicles in production by 2020.

Going the next step, to a driverless vehicle, is generally seen as something that won’t go into production for quite a few more years – perhaps not until 2030 or beyond. And it remains to be seen if state and federal lawmakers will approve such technology.

But the National Highway Traffic Safety Administration is one of the major proponents of autonomous technology – with a driver onboard as an emergency backup “operator.” NHTSA Administrator Mark Rosekind believes the technology could virtually eliminate the highway crashes that killed more than 32,000 Americans in 2014. That’s the last year for which full data is available, though preliminary figures suggest the death toll jumped 8% in 2015.

Even semi-autonomous technology will help, especially for a company like Uber that is fielding tens of thousands of vehicles around the world. A recent study by the Insurance Institute for Highway Safety found that vehicles equipped forward collision warning systems with automatic emergency braking experienced as much as a 30% drop in rear-end crashes compared to the same vehicles without that technology.

There are other reasons why Uber – and Lyft and other ride-sharing firms – want to go autonomous and, ultimately, driverless. The technology is expected to improve highway traffic flow, a serious impediment in major cities where ride-sharing is becoming a common option.

(Click Here for details about the self-driving auto alliance between carmakers and tech companies.)

Then there are the challenges Uber has faced with its drivers. It has had a number of well-publicized incidents in which drivers have assaulted passengers – and vice versa. Meanwhile, its drivers have become increasingly demanding. Responding to a California lawsuit, the firm is paying out $100 million to drivers who insist they are employees, rather than independent contractors.

While Uber is setting up its new tech center in Pittsburgh, it likely also will benefit from the autonomous vehicle programs set up by automakers and auto suppliers, as well as software giant Google – the latter firm announcing this past month a pilot program to install its self-driving technology in 100 Chrysler Pacifica minivans.