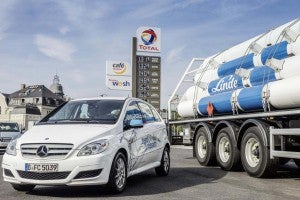 Facing increasingly stringent emissions and fuel economy mandates around the world, automakers are looking for clean alternatives, such as electrification and hydrogen. But making the switch isn’t as easy as coming up with a long-range battery or an affordable fuel cell. It also means making available to the public ways to “fill up” with clean sources of energy.

Both Honda and Daimler AG today announced plans to invest millions of dollars in sustainable energy – on top of what they’re already spending to develop clean powertrain technologies. Honda is partnering with U.S. based solar energy company solar city. Daimler, the parent of Mercedes-Benz, is, meanwhile, teaming up with Germany’s Linde Group to set up a network of hydrogen fueling stations.

“There is no question that fuel-cell technology is reaching maturity,” explains Herbert Kohler, Vice President Group Research & Sustainability and Chief Environmental Officer at Daimler AG. “From 2017, we are planning to bring competitively priced fuel-cell vehicles to market. So now is the time to build a nationwide fuelling infrastructure.”

Together, as part of their “H2 Mobility” project, Daimler and Linde are planning to invest around 10 million Euros, or roughly $13 million, to set up 10 hydrogen filling stations in Germany, including facilities in or near Berlin, Cologne, Munich and Stuttgart.

(Tough new clean air rules could be “fatal” to auto industry, VW CEO claims. Click Here to find out why.) 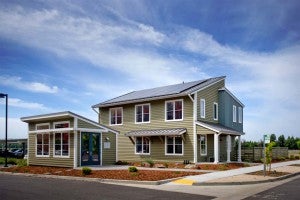 The German federal government has already committed to setting up 50 facilities to support what is expected to be the rapid growth of fuel-cell vehicles such as the fleet of F-Cell prototypes Mercedes has been field testing in Europe and the U.S.

Stateside, the State of California is hoping to set up as many as 100 or more hydrogen stations by the end of the decade. There currently are just a handful of places to tank up a fuel-cell vehicle, most of them in Southern California – a primary reason why most fleet tests are being run in that region, and why makers Honda, Hyundai and Toyota are limiting initial sales of their new fuel-cell vehicles to SoCal.

(Tesla hints at big announcement to come. What’s in store? Click Here for some hints.)

Proponents claim that by building more hydrogen filling stations, the industry will help overcome the chicken-and-egg syndrome. Daimler cites forecasts that call for 10s of thousands of fuel-cell vehicles to be on European roads by 2018 as hydrogen becomes more readily available.

Daimler, Ford and Nissan signed an agreement in 2013 to develop a line of affordable fuel-cell cars for sale starting in 2017. The three partners are targeting production of at least 100,000 cars. Daimler and Ford had been working on a joint fuel project going all the way back to 2007 when they bought out the automotive system business of Vancouver-based Ballard Power System, which continues to make fuel cells used experimentally in city transit buses.

For those who hope to see a boom in sales of electric vehicles, the lack of a significant charger network has also been an issue. There’s been a substantial increase in the availability of public facilities, and Tesla is one of several companies setting up networks of Level III high-speed charging stations across the U.S.

Honda’s announcement, however, is focused on efforts to provide true zero-emission energy to battery-car owners, rather than drawing power from a grid that might be dependent upon dirty energy sources such as coal. The goal is to make solar power more affordable and more readily available to owners of Honda and Acura vehicles – as well as for use in powering their homes, the maker explained.

The $50 million project is the second phase of a partnership with Solar City that, the companies claim, already has put in place enough solar cell arrays to “offset more than 400 million pounds of CO2 over a 30-year lifecycle.”

“We look toward a future in which renewable energy will be an increasingly pervasive fuel source for personal mobility products,” said Steven Center, Vice President of the Environmental Business Development Office of American Honda Motor Co., Inc. “The first phase of this partnership has proven that Honda drivers have a high affinity for solar power, while owners of solar-powered homes have a high affinity for Honda products.”

A number of automakers have launched solar energy programs, though many of those are focusing on providing energy at a factory level. That includes Volkswagen’s big solar park in Chattanooga, Tennessee, which can provide a major chunk of the power requirements for the maker’s assembly plant there.