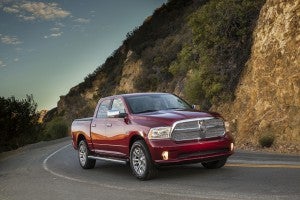 Despite big increase in fuel economy for the Ram EcoDiesel, sales of trucks and SUVs are driving down the average fuel economy of new vehicles in the U.S.

The upturn in the sales of pick-up trucks and sport utility vehicles is taking a toll on the average fuel-economy of vehicles sold in the United States, according to the University of Michigan.

The average fuel economy based on the mandatory window-sticker mileage figures of new vehicles sold in the U.S. in September stood at 25.3 mpg — down 0.5 miles per gallon from the value in August, U-M researchers reported.

“This large drop likely reflects the increased sales of light trucks and SUVs,” the survey’s authors said in a statement.

The U-M Transportation Research Institute (UMTRI) has been tracking fuel-economy trends since 2007. Despite the drop in the industry-wide fuel economy rating, vehicle fuel economy is up 5.2 mpg since October 2007, the first month of monitoring by UMTRI, U-M researchers Michael Sivak and Brandon Schoettle noted in the latest return. The rate of increase has slowed this year.

Sivak and Schoettle U-M’s Eco-Driving Index, which estimates the average monthly emissions of greenhouse gases generated by individual U.S. driver, stood at a record low of 0.77 in July. The new reading indicates that the average new-vehicle driver produced 23% lower emissions in July than in October 2007.

The U-M researchers also found that by and large hybrid owners are satisfied with their choice of vehicles and would consider buying another when they return to the market to replace their current vehicle.

Hybrid cars accounted for less than 4% of all light-duty vehicles sold in the U.S. last year. However, hybrid market share of 3.8% was at an all-time and it was the second straight year of rising sales for hybrids.

Sivak and Schoettle said environmental impact was the most important reason cited by owners for buying a hybrid, concern for the environment was cited by one third of the hybrid, while 28% cited the lower long long-term costs of operating a hybrid and 25% cited the reduction in the U.S. of energy as the principal benefit of owning a hybrid.

(To see how the new European clean air rules would be “fatal” to automakers, Click Here.)

“Females tended to be more concerned than males about the environmental impact,” Sivak said.

Among non-hybrid owners, 31 % indicated willingness to purchase or lease a hybrid for their next vehicle. Although a third of drivers are not considering hybrids at all, more than half of them would reconsider, especially if the initial costs were lower, the survey found.