Tesla Unveiling “Something Else” This Week 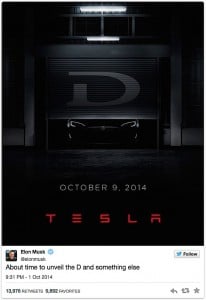 Speculation about what's coming on Thursday has run rampant, but most think it's an all-wheel drive Model S.

Last week, Tesla’s CEO Elon Musk sent out a cryptic tweet suggesting something new was coming on Thursday from the California-based EV maker and speculation has centered on what it is.

“About time to unveil the D and something else,” he tweeted.

The “D” is widely expected to be an all-wheel drive system for the Model S. However, the “something else” may be something much bigger: the beginnings of an autonomous Model S.

The maker is going to announce this week that it will develop a suite of technology that will keep its car in its own lane, according to Automotive News. The tweet cited an event the maker is hosting on Oct. 9.

While not quite a fully autonomous vehicle, Musk has suggested in the past that autonomous vehicles should be similar to jets on autopilot. This means that the vehicle would drive the vehicle in a cruising mode, such as being on the freeway, but not in areas, which require multiple decisions, such as an urban area.

He sent out a follow up tweet that showed his amusement, but not any more clarity about the coming announcement.

“I love the Internet. Comments had me literally ROFL. No, it wasn’t intentional. Glad I didn’t mention the other letter!”

As for an all-wheel drive version of the Model S, the rumors have been floating around for more than a year that it was coming. In fact, according to the media guide for the recently concluded Paris Motor Show, Tesla was supposed to show a “Model S All Wheel Drive,” but no such vehicle has shown up on its display … at least not yet. The public portion of the show runs until Oct. 19.

(Click Here for details on why new vehicle fuel economy is dropping.)

Other media reports have noted that the “D” stands for dual motors: one for each axle. While the car has received plenty of plaudits since its introduction, one demerit it’s gotten is for poor handling in rain and snow. A second motor would help that and, as if it needed it, it would also lower the Model S zero-to-60 mph time a bit from its current 4.2 seconds.

(To see how auto companies may be impacted by new European emission rules, Click Here.)

The maker could also use the event delve further into its plans to develop a certified pre-owned program for its used vehicles. The first Model S sedans will be hitting the three-year mark in another year, which when many vehicles begin to be sold or traded in for new vehicles.

Tesla officials confirmed they are in the early stages of developing a plan for reselling its Model S, according to Automotive News, which would be similar to those for BMW and Mercedes-Benz.