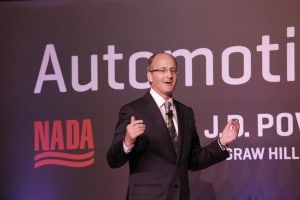 A proposal to mandate a single interest rate auto lenders can charge car buyers to ensure minorities weren’t discriminated against would only cause all buyers to pay more for a car, according to the National Automobile Dealers Association.

In a speech at an Automotive Press Association luncheon in Detroit, Forrest McConnell, president of McConnell Honda Acura in Montgomery, Alabama, and chairman of NADA, said the recommendation by the Consumer Financial Protection Bureau (CFPB) to require auto dealers to use a standard interest rate for all financed purchases denies buyers “their right” to a discounted interest rate.

“The government is trying to take away a customer’s right to get a discount,” he said. “The Consumer Financial Protection Bureau, CFPB, is working on statistical anomalies.”

While the CFPB, which was created in 2010 as an oversight body in the wake of the bank-led financial collapse in 2008, doesn’t have any control over auto dealers, it does hold some sway with banks: the institutions providing the loans for car and truck purchases.

Forcing everyone to provide the same interest rate shifts the advantage from buyers to lenders. The lenders willing to pay the highest fees will get a dealer’s business, McConnell noted.

However, he argues that forcing to banks to compete against one another pushes down prices for consumers.

McConnell and the other 17,600 dealers in the U.S. that all seem to support his views on the issue are getting some support from Congress. Rep. Ed Perlmutter, D-Colo., and Marline Stutzman, R-Ind., introduced a bipartisan bill that runs counter to the CFPB’s guidance. McConnell said, 69 Republicans and 40 Democrats support the bill.

“More people are signing on every day,” he noted.

(To see more about Peugeot’s plans to return to the U.S., Click Here.)

It requires participating dealers to set a standard interest rate for all buyers, but allows dealers to give a discounted rate as long as they provide the reason for giving the lower rate, such as besting another dealer or reducing inventories.