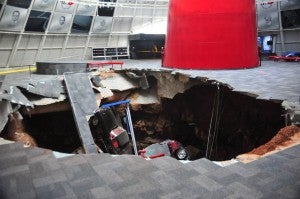 Well, apparently the National Corvette Museum’s board of directors likes old clichés as much as it likes old ‘Vettes as it approved a plan today to leave the 60-foot deep sinkhole in the museum’s Sky Dome as a permanent fixture.

In February, a 40-feet wide by 60-feet deep sinkhole opened up in the swallowing eight Corvettes being displayed at the museum, located in Bowling Green, Kentucky.

Initially, the plans called for General Motors’ design team to help repair the vehicles; however, as some were pulled out of the hole it became apparent that repairing them might be more difficult than expected.

While many mourned the potential loss, the museum saw its attendance skyrocket 59% in the months following. So plans for making lemonade began to be floated. The board considered three options:

Ultimately, the board voted for the last option. This option as it stands would include an opening approximately 25-feet by 45-feet wide, and 30-feet deep, providing views down into a portion of the cave, officials said adding the opening could have some existing ground and rock face, and a dirt embankment where one or two of the cars could be placed for display.

“We have to look at creative ways to generate interest in the Museum,” said Executive Director Wendell Strode. “It would be so much easier to just be a regular automotive museum with our Corvettes on display, but we have to think outside the box.”

(Click Here for more details from Mary Barra’s appearance on the Today Show.)

Until construction begins in September, the sinkhole and eight Corvettes will remain on display “as-is” through the end of August, when it celebrates its 20th anniversary.