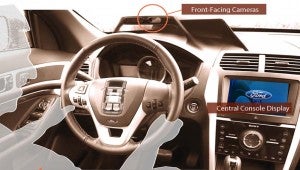 During a session sponsored by Ford this week examining new trends in the auto industry, a fundamental question was raised about all the new technology flooding the marketplace: have we reached a saturation point where consumers no longer can figure out how – or why – to use all those new features?

That’s a question that quickly returned to mind when Ford later unveiled Project Mobii, an experimental new app-based service, that would allow an owner to remotely monitor what’s happening inside their vehicle. But Ford and tech partner Intel are just as fast at ticking off potential applications for the new technology that uses five separate cameras mounted inside the passenger compartment.

Among other things, it might allow parents to keep an eye on a teenage driver. And the system could be programmed to block a thief from hotwiring the ignition and driving away – perhaps even quietly sending an alert to the police. There’s also the possibility that Ford could use the Mobii technology to better understand how motorists use its vehicles.

“Our goal with the Mobii research is to explore how drivers interact with technology in the car and how we can then make that interaction more intuitive and predictive,” said Paul Mascarenas, chief technical officer and vice president of Ford Research and Innovation. “The use of interior imaging is purely research at this point; however, the insights we’ve gained will help us shape the customer experience in the long term.”

(Ford feels the knee-d for airbag speed. Click Here for more on this new safety feature.)

That, of course, brings back up a controversy that was kicked off earlier this year when Ford’s global marketing chief Jim Farley told an audience at the annual Consumer and Electronics Show that the maker tracks a variety of information about how and where its motorists drive – a statement that Ford later retracted.  Indeed, Don Butler, the head of Ford’s connected vehicles operations, repeated that “We don’t track vehicles” during this week’s trends-in-autos conference.

The Big Brother potential is something that has become increasingly worrisome for privacy advocates and the public alike. On the other hand, there’s little doubt that consumers seem to relish the way technology is letting them both spy on the rest of the world and let them share their lives with friends, family – and even strangers.

Could Mobii, if Ford ever puts it into production, become a rolling version of Google Glass, recording our life behind the wheel? Perhaps. Several manufacturers, including BMW and Chevrolet, will soon be offering ways to record your driving experience through apps and built-in cameras.

The more likely possibilities for Project Mobii would be to keep an eye on teen drivers and, perhaps, the valet who was supposed to park – not drive – your car.  It could be used to make sure thieves haven’t broken into the vehicle, just as many homeowners now rely on in-house cameras and motion detectors to deter break-ins.

“If Project Mobii does not recognize the driver, a photo is sent to the primary vehicle owner’s smartphone,” Ford suggested. “That owner can then set permissions and specify features that should be enabled or disabled. If the driver is the child of the vehicle owner, for example, restrictions could be automatically set to require safety belt use and to limit speed, audio volume or mobile phone use while driving.”

Meanwhile, forget where you left those sunglasses? You could take a look remotely to see if they’re sitting in the center console.

There are other functions that could be put in place with a camera. With facial recognition software becoming increasingly sophisticated, it could tell which family member was behind the wheel, and personalize everything from the seat and mirror positions to the phonebook available for hands-free calling.

(Automakers are getting charged up about electric turbochargers. Click Here to find out why.)

The technology would also allow for gesture-operated commands.  Forget reaching for a knob of button. To close the sunroof you might simply reach up towards the glass and wave your hand, much like you slide a finger across the screen of a smartphone.