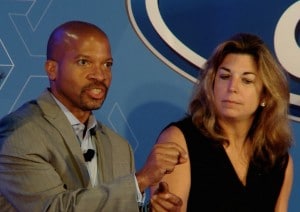 Ford's Don Butler noted that Ford’s designers and product planners are turning to social media and survey data as they wrestle with product design issues.

“Big Data” is already helping designers shape new vehicles and its influence will only grow in the years to come, according to a panel of experts assembled by Ford Motor Co. for its annual trends conference. Big data is the deployment of reams of data to meet a specific goal.

Don Butler, the former General Motors executive who is now Ford’s director of connected vehicles and service, noted that Ford’s designers and product planners turned to social media and survey data as they wrestled with whether the lift gate on the new 2013 Ford Escape should be one piece or two, which would allow drivers to open the rear window without raising the entire lift gate.

“There were no clear indicators,” he said.

Ford’s planners were leaning towards a two-piece solution on the grounds it was more practical. But they researched the issue through social media and discovered potential customers had a distinct preference for the one-piece lift gate.

Big Data is also enabling the emergency system that Ford is rolling out for the first time in the 2015 Ford Mustang. The system not only knows if an accident happens and pinpoints its location, the system will be able to identify the severity of the crash, giving doctors a chance to evaluate the trauma suffered by the accident victims and allowing physicians to guide the response of the paramedics.

Butler said Ford is looking at other ways to use data to help make driving safer. The automaker worked with Intel on a project utilizing cameras inside the vehicle to watch the behavior of the driver to better assist or coach them while they are behind the wheel.

Ford is also looking at whether a so-called wearable device could be linked to semi-autonomous driver assistance features so the car can take over more of the responsibility for driving the vehicle if the driver is upset or even disabled.

Chuck Holland, vice president of industrial services at UPS, noted that the delivery company just started using big data to plot the most efficient routes for its drivers to use each day. The system can save time and fuel and it now covers roughly 13,000 of UPS’s 55,000 drivers.

Holland added he doubted that except possibly in rural or remote areas that drones could be used to deliver packages as Amazon’s Jeff Bezos has suggested.

“For one thing the FAA won’t allow it,” Holland said. “I just don’t see 30 UPS drones and 20 drones from Fed-Ex and another 20 drones from Domino’s Pizza buzzing around over downtown Sandy Springs, Georgia, where I live,” he said.

On the other hand, autonomous vehicles could have big role in delivering quantities of packages to various depots, he said. “That’s quite possible,” he said.

The panel was led by Dan Wagner, who served as chief analytics officer for President Barack Obama’s successful 2012 re-election campaign, and he noted that Big Data and the analytics that goes with it, is replacing the intuition of “experts,” who use experience to guide the action of an organization.

“It can be tremendously disruptive,” he said.

But intuition is often misleading or wrong about how people react, he said. Thus, one of his roles in the Obama campaign was to use hard data to overturn conventional wisdom about how to approach certain segments of the electorate.

As the 2012 campaign intensified, analytics and Big Data were used to organize Obama’s schedule, to guide decisions on advertising and to identify likely voters who were leaning towards the President, said Wagner, who is the founder and chief executive officer of Civis Analytics.

Sheryl Connelly, Ford’s global trends and futuring expert, said keeping track of a variety of key trends ranging from the growing influence of women in all aspects of society to the increasing scarcity of water, is critical to Ford.

(To see why GM orders a “stop-sale” on Chevy Cruzes, Click Here.)

Ford pays particular attention to shifts in five broad areas or clusters. Trends in the economy, the environment, society in general, technology and political shifts are all watched carefully by experts inside the company, she said.

The effort is getting broad support from the very top of the company, Mark Fields, Ford’s next chief executive officer, said this week he has been spending time in Silicon Valley. “Part of it is to build relations but I also want to have a better understanding” of how things can change.

History is replete with examples of very successful companies whose business model was undermined by rapid changes they never ever saw coming, Fields said.