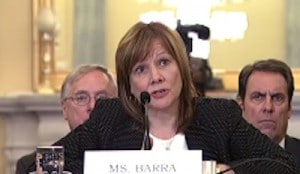 GM CEO Mary Barra was whacked like a pinata during hearings on Capitol Hill.

After having already recalled more vehicles than during any full year in its history, even as it faces a Justice Department probe that could result in criminal charges and hefty fines, General Motors is clinging to the hope that it somehow won’t suffer long-term damage to its brands.

So far, GM has managed to hang on despite the storm of negative publicity.  The company’s sales held up in April after the scandal became top-of-the hour headline news and it got a little bit of good news this week when influential ALG – the former Automotive Leasing Guide – issued a new report that the residual, or resale, values of GM car have remained relatively stable.

That said, the automaker is facing a flurry of legal actions that it warned this week lay claim to over $10 billion in potential damages.

“Similar to Toyota’s widespread ‘unintended acceleration’ recall from 2009, GM has seen short-term impacts to its resale values,” said Eric Lyman, ALG vice president of editorial. “It’s unlikely there will be any long-term effects, however, and ALG has no reason to forecast lower values than previously projected.”

Layman said the data ALG has recorded since 1964 has proven that few big crises have substantial long-term implications on actual resale values.

“We expect GM’s values to mimic what happened to Ford and Toyota after their mass recalls, with the affected vehicles hurting little more than GM’s reputation for several years,” he said.

But ALG’s findings are of relatively small comfort for top GM’s top executives, starting with chief executive officer Mary Barra, who back in January said she was looking increase GM’s market share this year. At this point, simply maintaining sales could be viewed as a challenging goal, according to many industry observers.

The negative publicity swirling around the company was made worse by a variety of recent developments, including the six recalls announced late last week, four more on Tuesday and yet another today – all told, adding up to about 5.2 million vehicles. Meanwhile, the U.S. Department of Transportation levied a record $35 million fine against GM earlier this month and could bring additional penalties for its handling of various safety issues.

The Detroit maker is hoping to put the embarrassing ignition switch debacle behind itself as soon as possible. But while it is rolling out replacement parts as quickly as possible, the repairs are taxing dealers – who aren’t expected to finish the process until at least October — and imposing a serious financial burden on GM.

The maker took a $1.3 billion charge in the first quarter for various recalls and and is facing another $400 million to $500 million in write-downs for the second quarter. That money would have been more than enough to finance the development of a new vehicle platform – and build a new ultra-modern assembly plant to produce it.

In addition, a pending ruling by a bankruptcy judge in New York could slam GM with even more costs. In a court filing, the maker estimated it is facing 79 lawsuits by customers demanding as much as $10 billion for the lost value of their vehicles as a result of the ignition switch problem. The automaker said it has been sued in 20 additional class-action lawsuits related to the ignition switch defect since April 30.

The lawsuits state that the pre-bankruptcy “old GM” promoted the vehicles as being safe and reliable. But under the terms of the plan that allowed the maker to emerge from its 2009 bankruptcy, “New GM” is no longer liable to legal claims based on actions – or accidents – that occurred before then.

Even if GM can minimize its financial burdens going forward, there is the reputational issue.

In her first day of testimony on Capitol Hill in April, Barra forthrightly blamed the ignition switch problem on a corporate culture that had put cost-cutting ahead of everything else. But the next day she seemed to retreat and was turned into a piñata by Senators who gleefully took turns whacking the GM CEO.

The pounding Barra took that afternoon also shook the entire industry because the one thing the badly divided Congress seems to agree on is that the auto industry needed tougher regulations. For example, Chrysler CEO Sergio Marchionne was left shaking his head and complaining about the tighter regulatory regime imposed on the industry as a result of the fiasco at GM.

The need to lay bare GM’s inner workings also creates some issues for Barra’s advisors. GM’s legal department is concerned that the disclosures are creating a swamp of litigation that will cost millions, perhaps billions to contain. The financial staff is undoubtedly worried about the company’s credit rating and the company’s image has already suffered major damage.

(Click Here for details about the four recalls GM announced for 2.4 million vehicles.)

The problems for GM’s image makers such as Tony Cervone, GM’s new vice president of communications who was brought back by Barra to help rebuild GM’s reputation, is that the new, post-bankruptcy GM is out of excuses. During the years leading up to the bankruptcy when Rick Wagoner was running GM, the company’s problems were always somebody else fault.

It blamed previous executive regimes, the United Auto Workers, Delphi, plunging foreign currencies, the federal government, dealers, even its customers.  Even GM’s bankruptcy was passed off as the fault of Lehman Brothers.

But as the recalls mount, Barra no longer has the luxury of spreading the blame and pointing the finger somewhere else. This time GM has to confront its own inner demons or steady residual values won’t really mean very much for its future.