What a Vision! Mercedes-Maybach Vision 6 Cabriolet is a Retro-Futuristic Show-Stopper

It may also offer some hints as to ultra-luxury products to come. 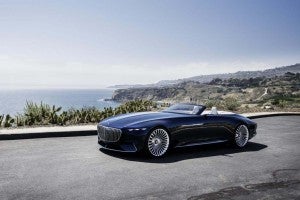 Think you know what an electric vehicle looks like? Then the Mercedes-Maybach Vision 6 Cabriolet is likely to leave you scratching your head.

The successor to the Vision 6 Coupe, the extreme luxury wing of Mercedes-Benz revealed last year, defies the logic that says tomorrow’s battery-cars are going to have small exterior footprints with large cabins inside, thanks to burying the driveline under the load floor. While there is plenty of interior space, the Maybach concept measures nearly 20 feet, nose to tail, with extra storage space, rather than a powertrain, hidden under that impossibly long hood.

“The Vision Mercedes-Maybach 6 Cabriolet takes modern luxury into the realms of the ultimate in luxury and is the perfect embodiment of our design strategy. Breathtaking proportions combined with a luxurious “haute couture” interior help to create the ultimate experience,” explains Daimler AG’s design chief, Gorden Wagener. 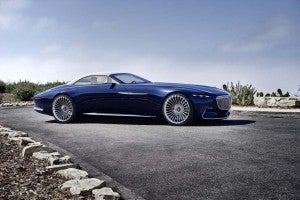 The new Mercedes-Maybach Vision 6 Cabriolet will be on view at the Concours d'Elegance.

The new Cabriolet does a remarkable job adhering to the original vision we saw at the Pebble Beach Concours d’Elegance a year ago, though it stretches about a foot longer than that retro-futuristic ultra-premium show car. Back then, Davis Lee, the senior designer who got credit for the concept, told TheDetroitBureau.com, “Fundamental beauty never changes,” adding that his goal was to create a look that was “very true” to the Mercedes brand.

Visually, at least, but we’ll get back to the drivetrain shortly.

Done up in Nautical Blue Metallic paint, the Vision 6 Cabriolet measures 236 inches of flowing lines and creases that pick up on an obvious art deco theme. The grille, with its 25 vertical slats, dominates the face of the concept convertible, the lower air scoops framed in chrome trim. Slit triple-LED headlamps flow back into the long front quarter-panels, just below sharp creases stretching from the face to the boattail back end. 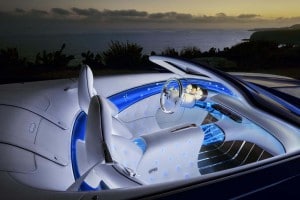 The retro-futuristic two-seat cabin with a brightwork, two-spoke grille and plenty of metallic accents.

The cloth top, with its woven gold threats, manages to maintain the sweeping lines of the original Vision 6 Coupe. When it opens it reveals a retro-futuristic two-seat cabin with a brightwork, two-spoke grille and plenty of metallic accents, including aluminum strips that emerge off the plank wood floor and run underneath the quilted seats – which are meant to resemble a Chesterfield sofa.

Designed to serve as an “open-air luxury lounge,” embroidered accents in the interior fabric pick up on the theme of the classic, round dials and what Mercedes call “hyperanalogue” gauges. At night, 360-degree interior lighting that is piped through blue fiber optics. 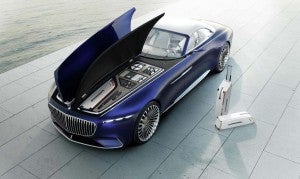 The battery-electric cabrio puts out a full 750 horsepower through its four permanent magnet synchronous electric motors – one for each wheel.

Perhaps the most striking visual feature of the Mercedes-Maybach Vision 6 Cabriolet is that hood which, at first glance, appears to consumer half of the concept convertible’s total length. Equally distinctive, the bonnet opens via twin clamshells. But don’t expect to find a classic V-12 under the hood.

Like the original Vision Coupe, this is actually a battery-electric vehicle punching out a full 750 horsepower through its four permanent magnet synchronous electric motors – one for each wheel. That’s enough to launch the Vision 6 from 0 to 60, Mercedes says, “in under four seconds.” The top speed is electronically limited to 155 mph and the battery pack hidden under the load floor is said to be capable of delivering 200 miles range using the U.S. EPA test cycle, more than 300 according to the European standard.

So, what to do with all that extra space up front? Wagener’s team worked in storage space for luggage, an umbrella, even the silverware you might want at hand for an elegant roadside picnic.

The Mercedes-Maybach Vision 6 Coupe and Cabriolet.

What to make of the Maybach Vision 6? We’ve been told not to expect either coupe or convertible to go into production, but the maker suggests “these show cars are looking far into the future.” As you might recall, Daimler began the millennium by trying to revive the once-proud but long-gone Maybach brand. It failed in its bid to be a competitor to the likes of Rolls-Royce and Bentley and was briefly pulled off the market, only to return as the renamed Mercedes-Maybach.

Currently, the MM badge adorns more upscale versions of top-line Mercedes-Benz models, notably the S-Class. But company officials, including CEO Dieter Zetsche, make no secret of their desire to come up with more distinct-to-Maybach offerings. So, don’t be surprised to see at least some of the design cues of the Vision 6 to resurface soon.

As for the driveline, Mercedes is really plugging into battery power. We will next year see the debut of the new Mercedes-EQ sub-brand which was introduced at the 2016 Paris Motor Show. With a growing number of countries planning to eliminate, or at least severely restrict, conventional gas and diesel powertrains, we wouldn’t be surprised to see a plug-in or pure electric Maybach, either, over the coming decade.