Is an all-electric AMG in the cards? 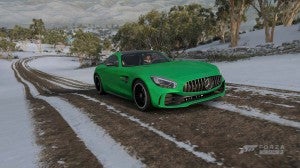 The Mercedes-AMG GT R takes on winter's worst in the latest expansion of the Forza racing game.

Once rare, Daimler’s AMG division seems intent on turning out high-performance versions of just about every possible Mercedes-Benz model – sometimes two or more, as it demonstrated at the Detroit Auto Show with the launch of several new Mercedes-AMG GT variants.

The latest AMG models are not just faster than ever, they’re flying out of showrooms at a record pace, with little indication of any slowdown in sight as the brand that began in a German garage marks its 50th anniversary.

AMG isn’t the only brand-within-a-brand success story for Daimler. If anything, however, Maybach may be an even bigger surprise, having come back from the dead just two years ago as the marque for Mercedes’ most exclusive models. The reincarnated brand is now selling more cars in China each month than it did worldwide in its previous life.

Even those who can’t afford a six-figure car loan now can drive an AMG – at least in virtual form. The new Mercedes-AMG GT R comes to life on “snow-covered roads and icy slopes” as part of the Blizzard Mountain expansion pack for the Forza racing game. 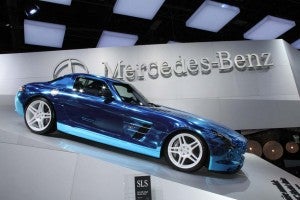 The Mercedes SLS Electric Drive made its debut at the 2012 Paris Motor Show.

For those with a bit more cash, Mercedes-AMG introduced three all-new or updated models at this month’s North American International Auto Show, including the GT C Coupe. And it hinted at more to come with an anticipated AMG version of the new E-Class Coupe.

(For more on the latest Mercedes models debuting in Detroit, Click Here.)

The GT is currently the most powerful and fastest model in the AMG portfolio, but a new hypercar, based on the Mercedes Formula One racer is in the works. Notably, that model will rely on an F1-based hybrid powertrain, a first for the German marque.

And that raises the question about whether AMG will go even further into the realm of battery propulsion. It already did introduce a low-volume, all-electric version of the old SLS model several years ago.

Nothing is currently in the works, said Dieter Zetsche, the Daimler CEO, during a conversation at the Detroit Auto Show, suggesting “the question is when,” not if, AMG will eventually do an all-electric model again.

That said, it won’t be easy delivering the sort of performance AMG buyers expect out of an electric drivetrain, he added. “We have to be aware that the combustion engine has been under development for 150 years, so it is an incredibly high barrier.” 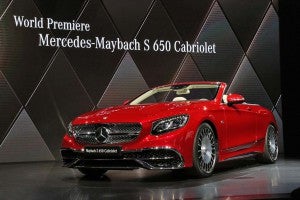 Nonetheless, AMG is facing a concerted assault by a variety of competitors, including new entrants like Tesla and Faraday Future. The Tesla Model S is already the world’s fastest production car from 0 to 60, and the Faraday FF91 – which debuted at this month’s Consumer Electronics Show, ahead of a promised 2018 launch – promises to be even quicker, a prototype hitting 60 in a blistering 2.39 seconds.

Of course, straight line speed is just one of the issues for a brand like AMG. Electric vehicles carry a lot of mass that can pose challenges if you’re trying to maneuver on a road course.

But it seems clear that it is, more  than anything, a matter of time until AMG is back with an all-electric.

Don’t be surprised to see Daimler go to a plug-based version of its most expensive products, either.

The Maybach brand was launched as a standalone operation in 2002. But it never came close to the 2,000 annual sales target and was abandoned in 2013 – only to make an unexpected return a year later. This time, it is known as the Mercedes-Maybach, with its current offerings based on the latest version of the S-Class. The revised formula is paying off, noted Zetsche, sales in China alone now topping 500 a month. 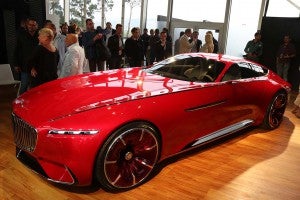 “We’ll see even more variation to Maybach in the future,” said Zetsche. That’s being built into the next-generation S-Class, he suggested.

But could Maybach get a truly unique product, as it did when it was a fully standalone brand? The CEO isn’t saying, but Daimler did give a hint with the debut of its Vision Mercedes-Maybach 6 concept at the Pebble Beach Concours d’Elegance.

Significantly, that impossibly long-nosed coupe used a battery-electric drivetrain. And that might make sense in the not-too-distant future considering global mileage and emissions standards, as well as the likelihood a number of cities in Europe and Asia will begin barring all but zero-emissions vehicles.