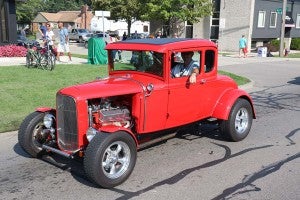 A little Deuce Coupe works its way down Woodward Ave. on Saturday during the Dream Cruise.

He might only be 10, but Ashley McInnis didn’t need much time to find the car of his dreams. Walking down the sidewalk along Woodward Avenue his eyes grew wide as he spotted a pearl white Ford GT.

“I love it,” the youngster from Yorktown, Virginia gushed to his grandfather, adding “I may have to take out a loan to get it.” When advised it would cost more than $400,000, he paused for a moment, trying to figure out how long that would take on the money he makes on his paper route. “It may take me a little while to pay it off,” he said.

McInnis was just one of as many as 1.5 million people estimated to line a 17-miles stretch of Woodward Ave., metro Detroit’s main thoroughfare, for the annual Woodward Dream Cruise.  And while there were a handful of new GTs and Ferraris, even the occasional Lamborghini and McLaren, the real focus was on the classic sort of muscle cars and hot rods that used to cruise the once quiet suburban roadway back in the 1960s and ‘70s.

There are plenty of classic car shows. In fact, this weekend has been a busy one on both sides of the country, high rollers gathering on California’s Monterey Peninsula for the annual Pebble Beach Concours d’Elegance. But the Woodward Dream Cruise isn’t your typical static car show. 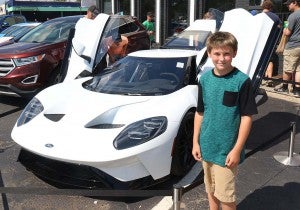 Ashley McInnis plans to save up for the $400,000 Ford GT he fell in love with Saturday.

Back in 1995, Nelson House, a plumber from the Detroit suburb of Ferndale thought it might be more fun to watch the cars in his club do what they originally did best…cruise. He lined up a few hundred for a run up Woodward, with a side goal of raising some money for a local charity. Organizers expected that maybe 30,000 to 40,000 people would come out to watch. The crowd turned out to be closer to 250,000, according to local authorities, and has grown ever since.

“I’ve only missed three years,” boasted Jeff Caruso, as he hovered near the carefully restored, 1967 El Camino he brought to this year’s Dream Cruise, and he’s still angry that a close family member scheduled a wedding on one of those weekends. Now 58, he started working on cars when he was 16, though it took him three years to convince him to buy the El Camino he’s had ever since.

Caruso, like many attending the Dream Cruise, paid to reserve a spot to park along the long route, which started out at the notorious 8 Mile Road city limits of Detroit and ran all the way to the northeast suburb of Pontiac.

(BMW rips back the covers on its Z4 Roadster Concept. Click Here for a closer look.) 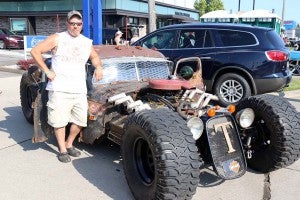 Not surprisingly, a large share of the crowd comes from local communities, but the Woodward Dream Cruise also attracts some out-of-towners. In recent years, they’ve come from as far away as Australia. Chris Babio only had to drive 300 miles from Chicago, but he said it was more than worth the five hour trip.

“I’ve always heard about the Dream Cruise,” which began just after he was born, “and I’ve always wanted to click it off my bucket list,” Babio said, showing the Woodward T-shirt he was about to put on over his Chicago Cubs T. Standing by the side of the road with Chicago buddy Mitesh Patel, Babio gaped and awed as one after another ‘60s muscle cars drove by, saying the event was even better than he expected. “I just didn’t expect this many cars.” 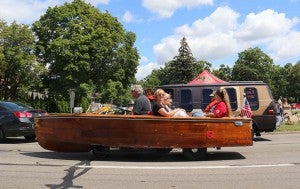 Woodward Dream Cruise draws some strange custom cruisers, including this boat on wheels.

Back in the days when cruising Woodward was more than just a one-day event, hot summer nights would draw out some of the hottest – and fastest – cars in Metro Detroit. And it wasn’t just teenagers who would show up to race down the wide, smooth boulevard before there many shops and stoplights, like there are today. It was common to find folks from Detroit’s Big Three automakers there to test out their latest models, and even some early prototypes. That included the notorious John DeLorean who used Woodward to measure the merits of the legendary Pontiac GTO – or “goat” to aficionados. 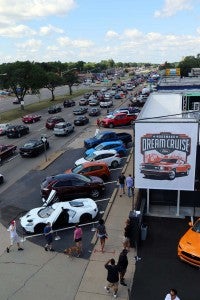 “I sold a bunch of the cars out here,” boasted Chuck McDonald, a now-retired car dealer, as he sat along the sidelines near 13 Mile Road. “I love looking at old cars,” he said, admitting that these days he’s gotten too old to do the Cruise himself.

Cruising probably wasn’t the right word to describe the action on Saturday. For much of the route, there were far too many cars out to do much more than move at a crawl. By various, unofficial estimates there were somewhere between 60,000 and 100,000 true “cruisers,” classics like those that might have actually been found on Woodward Avenue a half-century ago. There were far more vehicles being driven by spectators who found it more fun to drive along and spot their favorites.

Among Dream Cruise fans and participants there are a variety of niches. There are those who love classic muscle cars, like the GTO, the Dodge Challenger and the Ford Mustang, that have been lovingly restored, though often tricked out to deliver lots more power than what rolled out of the factory. 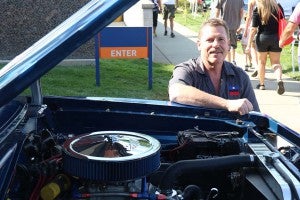 Jim Wright used to jump out of airplanes. Now he gets his adrenaline rush from a notchback '67 Plymouth Baracuda.

That included Jim Wright, who came to the Cruise this year in a perfectly restored 1968 Plymouth Barracuda Notchback. With its heavily modified 340 cubic inch V-8, he estimated it now makes “maybe 400 horsepower. Okay, maybe a lot more than 400 hp.”

Wright loved muscle cars when he was a kid growing up in the Detroit suburbs, and said, “I’d race ‘em on the street and make money.” But his real love was skydiving, something he spent 30 years doing. He’s jumped out of “everything that can fly, up to a 727,” he boasts. But his passion turned back to muscle cars a few years back and he bought the Barracuda.

“It may not be quite the rush of jumping out of a plane, but the acceleration, the adrenaline, there’s nothing like it,” he said. 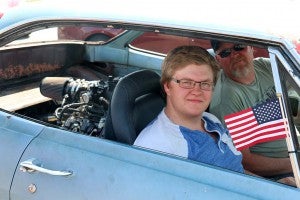 "Life got in the way," say Bill and Evan West, explaining the 18-years its taken to get their Corvair on the road.

A moment later, there’s a guttural road as Evan and Bill West, father and son from Alma, Michigan, drive by in their ancient, time-worn 1965 Chevrolet Corvair. A quick check reveals the back seat is missing. In its place is a Corvette LT1 V-8 making perhaps four to five times more power than the little car’s original engine.

“I’m just finishing it up,” said father Bill West, admitting he still has to put back some windows after spending 18 years on the project. “Life got in the way,” he added, cryptically.

Actually, not everyone minds having a “rat rod,” a truly dinged up cruiser that has one thing going for it: a big engine. Troy Craven drove over for this year’s Cruise in a rust bucket that looks like it just rolled off the set of the next Mad Max movie. He said he spent several years working on the crate, which rides on a handmade frame and used parts from an old Buick, a ’54 International – and even some street signs for the insides of the doors, “because I got bored.” 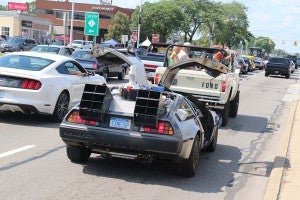 A DeLorean converted to look like the one in the film, "Back to The Future."

(Hippies rejoice! VW will build a modern version of the old Microbus. Click Here to check out the new, battery-powered VW I.D. Microbus.)

As for Matt and Diana Shoup, it doesn’t matter. They love all the Cruisers, they said, as they watched traffic slowly creep buy on Saturday afternoon. Married long enough they now finish each others’ sentences, they said that the car scene was the best part of moving to Detroit from mid-Ohio, some years back.

“We just like…” Matt began…”Old cars,” added Diana, before they both chimed in together. “Coming out here is as much fun as we can have.”

(Daimler offers a hint of its ultra-luxurious future with the Mercedes-Maybach Vision 6 Cabriolet. Click Here to check it out.)