Both passenger and commercial versions of long-range EV van planned. 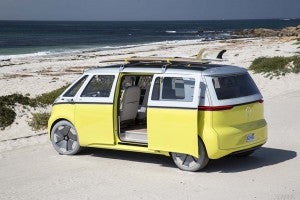 Volkswagen confirmed the rumors that it's bringing the I.D. Buzz, better known as the Microbus EV, to market.

The Volkswagen Microbus was an icon of the Hippie era. Could the German maker score again in an age when the youth generation is focused on environmental issues? It’s certainly hoping so, as it confirmed widespread rumors that it will put a modern version of the Microbus, the Volkswagen I.D. Buzz, into production.

First shown at the January 2017 North American International Auto Show, the I.D. Buzz Concept picked up on many of the classic microvan’s design cues, starting with the relatively blunt nose and flat roof. But instead of the rear-mounted engine of the classic Microbus, the I.D. Buzz will rely on a pure battery-electric drivetrain.

“After the presentations at the global motor shows in Detroit and Geneva, we received a large number of letters and emails from customers who said, ‘please build this car,’” Volkswagen CEO Herbert Diess said at a presentation today, ahead of the annual Pebble Beach Concours d’Elegance. The location, he added, made sense, since “The Microbus has long been part of the California lifestyle. Now we’re bringing it back by reinventing it as an electric vehicle.”

While slow out of the gate, VW has been rapidly plugging into electric propulsion. It now has a variety of hybrids, plug-ins and even pure battery models, such as the e-Golf. But it is also working up an entirely new sub-brand, Volkswagen I.D., specifically for electrified offerings. All told, Diess has said there will be at least such models in the line-up a decade from now.

(Volkswagen challenges Tesla Model 3 before it hits the streets. For more, Click Here.)

VW received an overwhelming number of letters and emails asking them to produce the I.D. Buzz.

The rollout of the I.D. line will start with a more conventional four-door passenger car model based on the first I.D. concept before the end of the decade. The I.D. Buzz, it said today, “will arrive at dealerships in 2022,” and it “is mainly targeting markets in North America, Europe and China.”

As with the passenger car – indeed, just like virtually all new electric vehicles coming to market now – the I.D. Microbus will adopt a skateboard-like platform pioneered by Tesla and General Motors. That means the batteries and key drivetrain components will be under the load floor. That serves several purposes:

That will be doubly beneficial, as the German automaker says it plans to offer both passenger and cargo versions of the I.D. Buzz.

“The vehicle looks like a compact commercial van on the outside, even though it offers the generous interior space of a large SUV,” Diess explained. 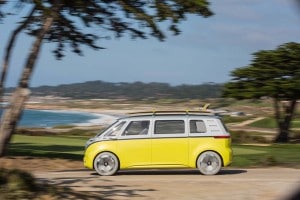 The I.D. Buzz will come with some autonomous driving capability available.

Meanwhile, the automaker expects to make the I.D. Buzz available with some autonomous vehicle capabilities. Formally known as Level 3 autonomy, it will allow a motorist to shift to self-driving mode, though someone will need to remain behind the wheel ready to take over in an emergency.

“With Level 3 autonomous capability, this is an ideal concept for an electric van, particularly for delivering packages and goods to the inner cities,” said commercial vehicles division CEO Eckhard Scholz.

The company hasn’t yet said what sort of range or power the new Buzz will make, though an earlier concept, the 2016 Volkswagen BUDD-E, was expected to deliver 373 miles under the European test cycle, or more than 200 using EPA standards.

VW has been looking for ways to bring back the Microbus for years, rolling out a series of promising concepts that failed to meet the mark for a variety of reasons. A key challenge has been designing in a modern drivetrain while also meeting modern safety standards, something that caught several earlier designs coming up short.

The new I.D. Buzz has a bit more of a front end than the classic T2 Microbus, allowing for space to handle frontal crash loads. But it still comes across as a modern version of the old Hippie van, rather than just another boring people-mover. And with a long-range electric drivetrain, it could arrive at a time when battery propulsion is expected to finally begin making real inroads in the market, especially among young, environmentally friendly car buyers.