Victory, Defeat – and Plenty of Surprises – at the Rolex 24 at Daytona

Another tequila sunrise to start the 2016 racing season. 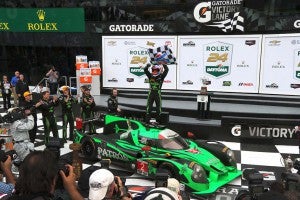 Luis Filipe Derani celebrates after driving the last leg in the ESM team's Honda at the Rolex 24.

It wasn’t champagne flowing in Florida Sunday afternoon — nor milk, the beverage of choice for Indianapolis 500 winners. After 22-year-old Luis Filipe Derani shot across the finish line to wrap up the Rolex 24 at Daytona, the drink of choice was tequila.

No surprise, for Derani and his four co-drivers claimed an unprecedented victory behind the wheel of the Honda-powered Tequila Patron Extreme Speed Motorsports prototype, a full 26 seconds ahead of their nearest competitors.

It was the first time ever that a P2-class race car had claimed victory in what is generally seen as America’s most grueling endurance race – and a prelude to the summer’s main event, the 24 Hours of Le Mans. 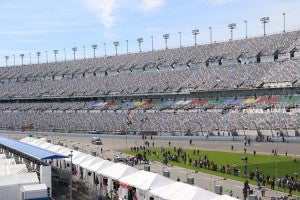 A $400 million investment means 101,500 seats for the new Daytona Motorsports Stadium. (Click to Enlarge All Pics.)

Amazing was a word that was heard quite frequently over the weekend, the Rolex 24 marking the official debut of a radically updated Daytona track. The aging stadium was due for some repairs, but the heirs of founder William “Bill” France Sr. went far beyond a mere upgrade.

They invested over $400 million – nearly 135 times more than the complex originally cost in 1959 — to transform the Daytona International Speedway into what they’re now calling the world’s first motor “stadium.” While the bleachers on the back side of the track are gone, the Rolex 24 revealed a set of bleachers far longer than Dayton’s front straight.

The ESM P2 taking the checkered flag after the Lamborghini ran out of gas with just three minutes left in the race.

There are 101,500 permanent seats, though that could be expanded to 125,000.  In fact, the stands were largely empty, fans of the endurance race instead filling the sprawling infield, thousands of RVs and trailers giving them opportunity to curl up, eat or drink as the sun set and a cool breeze wafted in from the Atlantic beach nearby.

(Back to the Future? DeLoreans go back into production. Click Here for more.)

Hour by hour, the leaderboard changed as crashes and mechanical problems took their toll. But, as is often the case, some of the most dramatic moments came in the final minutes of the Rolex 24 at Daytona. 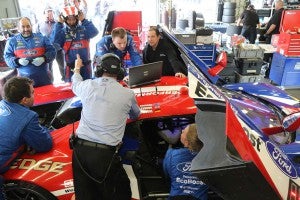 The two Ford GTs were strong - when they ran - but faced mechanical trouble.

With barely three minutes left before the checkered flag came down, the Lamborghini Huracan GT3 driven by Fabio Babini seemed unbeatable. But the late-game surge that propelled him to the lead left his fuel tank empty. ESM’s Honda prototype, followed by two Chevrolet Corvettes, shot past.

While General Motors officials weren’t able to hoist the big trophy, they still had reason to celebrate, that pair of Corvettes grabbing the second and third spot on the podium. In an unusual move, GM’s team manager approved a race-to-the-finish by ‘Vette drivers Oliver Gavin and Antonio Garcia, Gavin slipping by as the checkered flag came down by a mere .034 seconds. 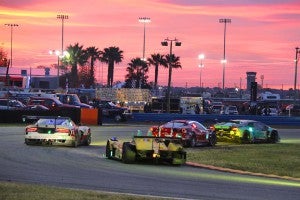 The sun rises over the Daytona Speedway, er, Stadium.

Not everyone was quite so pleased with the results of the long and demanding race. Ford Motor Co. came to Daytona with extremely high hopes for not only its two prototypes but the pair of brand new GTs making their track debut.

(For more on the new Ford GT, Click Here.)

The GT is a sheet metal homage to what was arguably Ford’s most successful race car ever, the GT40 that dominated the global endurance circuit in the 1960s. That included an equally unprecedented 1-2-3 sweep during the GT40’s first outing at Le Mans in 1966. 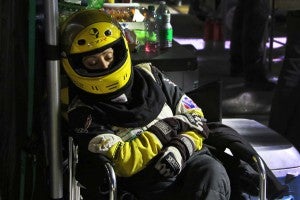 The march to that victory began at Daytona, and Ford had hoped to start this year’s campaign off with a similar weekend showing in Florida. It wasn’t to be, a series of problems – primarily with brakes and balky transmissions – left the maker lagging near the back of the pack, though both cars did manage to run until the end.

“The earlier some of these problems happen, the better off we are,” Ford global product chief Raj Nair told TheDetroitBureau.com, as it provides more time to address them before the trip to France. “We’re doing everything we can to focus on winning Le Mans.” 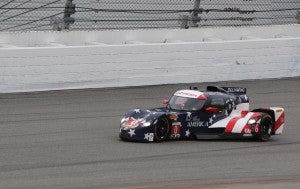 A perennial crowd-pleaser, the Delta Wing ran strong until its overnight crash.

Equally disappointing was the overnight crash that took out the quirky Delta Wing car fielded by Elan Motorsport Technologies, of Brasselton, Georgia. Shaped like a dart, the ultralight, relatively low-powered DP01 dominated the early hours at the Daytona circuit. But it smashed into a prototype that had stalled in a tough corner where it was difficult to see.

Elan owner Don Panoz has faced a series of technical problems since the debut of the Delta Wing, but his hopes of finally getting the fan favorite into contention will have to wait again. 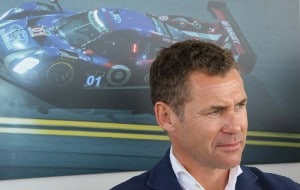 As the first big race of the year, the Rolex 24 at Daytona sets the racing world back in motion after a brief winter break. The various endurance series will next head to places like Sebring and Silverstone. And while it doesn’t mark the end of the season, everyone is now focused on June’s day-long running at Le Mans.

Don’t downplay Daytona, said Tom Kristensen, a nine-time Le Mans winner. It is as challenging a track as you can imagine, and it is rich “with tradition. It is a special place,” said this year’s Grand Marshal. 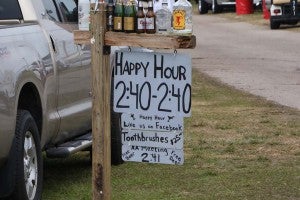 The bleachers might have been empty because everyone was celebrating the race in the infield.

“We learn a ton from this race,” everything from engine design to aerodynamics, Reuss said during a brief break at the Daytona 500 Club lounge. And that will impact not only what GM does during the rest of the race season, but what it will eventually put on public roads.

As for the France family, Le Mans sets the stage for a busy year. It will soon be followed by the season’s debut NASCAR event. And the wildly popular Daytona 500, scheduled for February 22, will be the real test of whether they can fill those 101,500 seats at the new stadium.