New Ford GT Set to Make its Debut – on Track 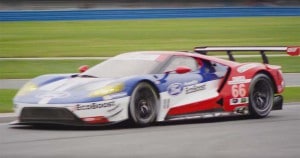 Potential buyers will have to wait until later this year to get their hands on the $400,000 Ford GT. But for race fans, the wait is almost over, two track versions of the exotic Ford set to take to the field this weekend for the annual Rolex 24 at Daytona.

Carrying the numbers 66 and 67, they’ll be part of a four-car assault being planned by the Ford Chip Ganassi Racing team as it heads back to the Florida speedway to defend its title.

If the two GTs deliver during their debut event it would mark Ford’s seventh overall win at Daytona – and it would come a half century after Ford’s upset, 1-2-3 win at Le Mans with the original GT40.

“It’s definitely been a challenge getting the No. 66 and No. 67 – which are completely new to our engineers and mechanics – ready for such a big race to start the new season,” said Ford Ganassi team manager Mike O’Gara. “We have had to push ourselves with our testing and off-season prep to make sure the Ford GT program is where it needs to be to make sure we are competitive right out of the gate.

(Fisker back in the supercar game with new Force 1. Click Here for a closer look.) 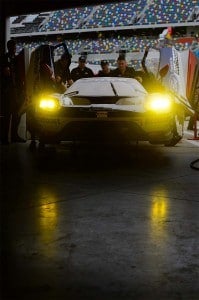 The Ford Gannassi Racing team preps one of the two GTs heading to Daytona.

Along with the two Ford GTs, the Ganassi team will field two Ford EcoBoost Riley prototype cars during the 24-hour endurance race that marks the beginning of the 2016 motor sports season.

In the GTLM class, WEC Ford GT driver Stefan Mücke joins full-time IMSA WeatherTech SportsCar Championship drivers Ryan Briscoe and Richard Westbrook in the No. 67 car. Sébastien Bourdais will be paired with Joey Hand and Dirk Müller in the No. 66 car.

There’s a good reason why Ford is looking forward to the Rolex 24. In 1966, it came to Daytona with the original GT40, beginning a sprint that ultimately saw it climbing the podium at Le Mans, an unexpected victory that topped such traditional European contenders as Ferrari and Porsche.

(Ford swoops in with new Raptor SuperCrew. Click Here for a closer look.) 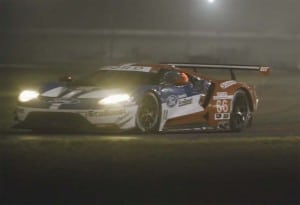 The new GTs will have to show they can stand up to a 24-hour endurance race.

Ford officials insist their chances are good, noting that the new GT was designed, first and foremost, as a race car, and only then was a street version spun off.

Ford is keeping specific details, like horsepower, close to the vest, but it notes that the new GT is powered by an updated version of the 3.5-liter EcoBoost V-6 that debuted in the TUDOR United SportsCar Championship in 2014. The most powerful EcoBoost production engine ever, development was supported by Roush Yates.

As for the production Ford GT, it will make extensive use of ultra-light carbon fiber and aluminum, with a hefty emphasis on aerodynamics to boost the performance of an engine rated at somewhere around 720 horsepower.

(Callaway pushes Camaro to 600 hp. Click Here to check it out.)