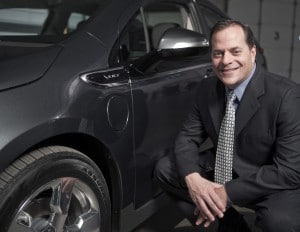 GM tabbed Doug Parks to head up its new team focused on autonomous and battery-electric vehicles.

GM said in an internal announcement the combined team will focus on accelerating the company’s technical capabilities and create the future direction of GM vehicle programs in the autonomous and technologically advanced vehicle space.

Doug Parks, who had been Vice President, Global Product Programs, is leading the new effort as Vice President, Autonomous Technology and Vehicle Execution. According to GM, the group is responsible for “creating and executing autonomously driven vehicles in addition to advanced technology vehicle programs, including hybrids, battery-electric and fuel-cell vehicles.”

“Parks and his team will be the single point accountable for all critical technologies and total vehicle solutions in the areas of electrical architecture, controls and software, system and safety integration, development and validation, sourcing and execution,” the company said in a statement.

Expanding the group focusing on this level of autonomy and technology shouldn’t be a surprise. GM has been pushing its technological prowess for the past several years. The latest effort is the company’s introduction of the new Chevy Bolt.

The EV may be the first viable, mainstream affordable vehicle built in high volumes. Expected to get 200 miles on a full charge, the Bolt is expected to cost $35,000 after government tax breaks. The vehicle mitigates two of the biggest problems EVs have faced: limited range and cost.

The automaker is also making big moves on the personal mobility front that may be impacted by this new unit down the road. General Motors apparently hopes to become an industry maven when it comes to alternative mobility programs. After investing in two ride-sharing services, Lyft and Sidecar, this month, the Detroit automaker says it will start a new car-sharing company called Maven – a Yiddish word for “expert.”

“With the launch of our car-sharing service through Maven, the strategic alliance with ride-sharing company Lyft, and building on our decades of leadership in vehicle connectivity through OnStar, we are uniquely positioned to provide the personalized mobility services our customers expect today and in the future,” GM President Dan Ammann said.

GM began the month by announcing a $500 million investment in Lyft, the chief rival to ride-sharing service Uber, then followed up with a partnership with Sidecar. The company is not saying how much it will spend to get Maven going, though it did say the car-sharing firm will have a staff of 40 employees who have been hired from the connected car field, as well as from Sidecar, Google and rival car-sharing service Zipcar.