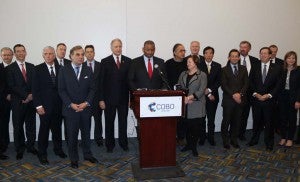 In an unprecedented move, 18 global automakers have agreed to form a broad consortium aimed at not only developing advanced safety technology but also bringing it to a broad a range of consumers as quickly as possible.

The concept was modeled after a similar and successful program developed by the National Transportation Safety Board and Federal Aviation Administration to work with aerospace manufacturers like Boeing and Airbus.

The first of what could become a wide range of projects is already underway, TheDetroitBureau.com has learned. The members of the new consortium agreed earlier this month to pool resources in an effort to thwart the threat of hackers. Cyber-security is considered a critical issue as the industry adds more digital technology to vehicles and works towards a collective goal of putting autonomous vehicles on the road.

The new safety consortium is a “strong start,” and a “new approach,” said Transportation Secretary Anthony Foxx, surrounded by senior executives from all 18 automakers.

“Perhaps years from now,” he continued, “we will look back at this moment as a moment when, at a time when there may have been some skepticism about the safety of the automotive industry, in general, the industry stepped up and made a hard pivot with us towards a proactive culture.” 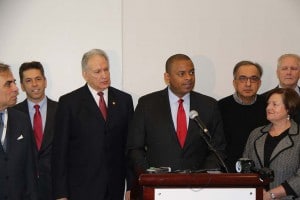 "The industry stepped up and made a hard pivot with us towards a proactive culture," said Foxx.

The announcement comes at a critical time for both the auto industry and automotive regulators. Safety recalls hit an all-time record 64 million in 2014 and fell only slightly short of that last year. Automakers like General Motors, Toyota, Fiat Chrysler, Honda and BMW were hit with large funs – GM paying $900 million to settle an investigation by the U.S. Justice Department into its delayed ignition switch recall.

But NHTSA has also come under fire for its own failings, prompting Rosekind to announce a series of reforms – while also stepping up efforts to change what he has called “the culture of safety” among both regulators and automakers.

Brought in to handle the troubled agency in December 2014, the former NTSB chief has been trying to adopt some of the so-called “best practices” used to improve safety in other industries, notable the aerospace world where the sharing of data, and even proprietary technologies, has achieved dramatic results. The U.S. saw no fatal crashes over a four-year period prior to an incident in San Francisco where an Asiana airliner clipped a seawall during landing.

The new automotive safety consortium will encourage automakers to share information on safety issues. Among other things, this could help “catch safety defects before they explode into massive recalls,” said Sec. Foxx.

But the goal is to go even further, with manufacturers eventually pooling resources, possibly including intellectual property.

That could yield significant results, said David Zuchowski, CEO of Hyundai Motor America, by letting manufacturers jointly come up with safety breakthroughs faster and at a fraction of the cost of each going it alone. 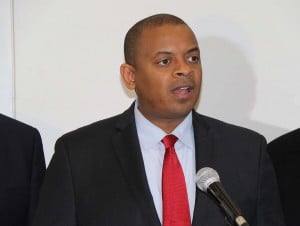 The new approach picks up on a strategy that has helped improve airline safety, said Foxx.

But another goal is to streamline the regulatory process and, indeed, focus less on the classic, government-mandated approach to force innovation.

“Technology is moving so quickly and the legislative process moves so slowly,” noted Zuchowski. “This is the right way to do this.”

For his part, Sec. Fox suggested that, “It is an approach that leans on being proactive rather than reactive.”

There is already a sign that this approach can work. Last September, a group of 10 automakers signed up to work on the concept of Emergency Auto-Braking, or AEB, which can help alert a driver to a potential frontal collision, and actually attempt to stop the car automatically, if necessary.

Earlier this week, NHTSA Administrator Rosekind said he expects an announcement to come later this week indicating the group’s efforts will result in the widespread application of the advanced safety system.

Executives participating in the newly announced consortium appeared uniformly positive about the new, more cooperative approach. “I do think we will look back and see this was very historic,” said Mary Barra, the Chairman and CEO of General Motors.

Fiat Chrysler CEO Sergio Marchionne was equally upbeat. Earlier in the week, the executive said, “We need to get to the stage where safety is no longer a competitive tool,” but something all manufacturers are expected to deliver.