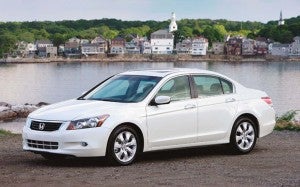 The 2008 Honda Accord is one of the vehicles affected by a recall due to faulty airbag controllers.

A total of 5 million vehicles will be recalled due to a defective airbag control module that could accidentally trigger one of the devices – or prevent an airbag from deploying in the event of a crash.

The announcement by German supplier Continental comes less than a day after one of its customers, Honda Motor Co., issued a recall covering 341,000 Accord sedans. Separately, the Japanese maker also announced it was recalling 2.23 million Honda and Acura vehicles due to faulty Takata airbags.

Widely hailed as one of the most significant safety devices since the introduction of the seatbelt, airbags have become the source of some of the biggest recalls in recent years. The Takata problem alone is now affecting more than 20 million vehicles in the U.S.

In the case of the latest recall, Continental discovered that under some conditions the modules used to trigger an airbag deployment in the event of a crash can become exposed to moisture. In turn, that can cause corrosion leading to a module malfunction. In some cases, that could cause the bag to trigger, possibly while a motorist is driving. Alternatively, the bag might not fire in the event of a crash.

(Click Here for more on the latest Honda-Takata recall.)

That led Mercedes-Benz to recall a small number of vehicles last autumn. As the extent of the problem became more apparent, Honda today said it would recall 341,000 Accord sedans sold during the 2008 to 2010 model-years.

The National Highway Traffic Safety Administration says four other automakers and one truckmaker will be involved in the recall – which will ultimately involve 5 million vehicles built during a five-year period worldwide. The others are Fiat Chrysler, Mazda, Volkswagen and Volvo Trucks. Kia, the sixth maker that purchased the control modules from Continental, did not use any of the suspected devices on vehicles sold in the U.S. market.

Honda said it has received 1,575 warranty repair claims and 83 field reports linked to the problem, while also recording two injuries.

A total of 126,260 vehicles were covered by the Mercedes recall and another 112,001 are affected by a Fiat Chrysler recall also announced today. A breakout of vehicles likely to be affected at other manufacturers has not been released.

(New safety tech shown to reduce rear-end crashes by up to 40%. Click Here for details.)

The Continental airbag controller recall should not be confused with the fast-growing series of recalls involving Takata airbag inflators. As of the beginning of the month, more than 19 million vehicles sold in the U.S. were affected by that defect – which can trigger airbags to deploy over-aggressively, sending plastic and metal shrapnel spewing into the passenger compartment. At least 10 deaths have now been linked to the issue.

Honda issued a separate recall today covering 2.23 million Honda and Acura-brand vehicles using Takata inflators. The eventual tally for the U.S. market is now approaching 25 million, with several other makers expanding their own recalls since the beginning of the year.

A total of 14 automakers have recalled vehicles due to the Takata defect. It is now the largest collective recall in U.S. automotive history.