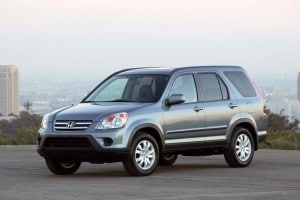 Honda now says it will recall more than 2.2 million vehicles due to faulty Takata airbags, about 500,000 more than was originally reported on Wednesday. And the maker says a separate airbag defect will force it to recall 341,000 more vehicles.

All told, the problem with Takata airbag inflators forced Honda and its Acura luxury brand to recall 8.51 million vehicles, more than any other manufacturer. But the defect – which can cause airbags to overinflate and spew shrapnel into the passenger compartment – has now forced the recall of more than 20 million vehicles by at least 10 manufacturers in the U.S. alone.

The second recall involves the popular Honda Accord sedan. Older models can experience a failure of their airbag control units, which means the supplemental restraint system, or SRS, may not deploy in a crash. A number of other manufacturers are affected by this problem, as well.

The larger problem involves a wide range of Honda products equipped with faulty Takata airbags. At least 10 deaths have been linked to the issue. The most recent fatality involved an older Ford Ranger pickup, though most have occurred in Honda products.

Though a precise cause has not yet been determined, it appears to be linked to Takata’s use of potentially unstable ammonium nitrate in its airbag inflators. Some experts believe the material begins to break down as a vehicle ages and experiences the shocks and bumps of normal road use.

Initial reports on Wednesday indicated about 1.7 million vehicles would be recalled as part of an expanding investigation into the Takata defect. That number left out more than 500,000 vehicles sold by Honda’s luxury subsidiary, Acura.

At this point, the products subject to the latest recall include:

But Honda is not alone. Mark Rosekind, the head of the National Highway Traffic Safety Administration, last month warned that there could be still further expansion of the Takata recall, which at that point had affected more than 19 million vehicles. The figure could soon approach 25 million in the U.S. alone, according to several industry observers.

A major challenge for Honda – and other makers – is getting those vehicles repaired. Despite an aggressive campaign, Honda brand boss Jeff Conrad told TheDetroitBureau.com that only about 50% of the vehicles Honda had targeted prior to this week’s recall have so far been repaired. Part of the challenge is that most of the vehicles are older models that may been resold several times since first being produced.

The second new recall involves 341,000 Honda Accords sold during the 2008 to 2010 model-years. Their airbag control modules may be sensitive to water, something that could cause them to fail before a crash. At least two injuries have been linked to the problem, according to Honda.

The modules were produced by German supplier Continental, and as with the Takata airbag inflators, the control unit was provided to a number of different automakers. Mercedes-Benz was the first to identify the problem and order a recall last autumn.

Preliminary indications are that as many as 5 million vehicles may ultimately need to be recalled to replace the airbag control modules.