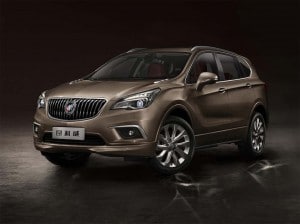 Sales of the Buick Envision in the China have gone gangbusters and now GM plans to bring the hot-selling crossover to the U.S.

General Motors has confirmed plans to import its first Chinese-made vehicle, a compact crossover that will be sold in the U.S. as the Buick Envision.

Currently, only one other vehicle produced in the Asian nation is sold in the States, a limited-volume, stretched version of the S60 sedan sold here as the Volvo Inscription. Efforts to open an export market by various Chinese manufacturers, such as Volvo’s parent Geely, have repeatedly been postponed.

GM’s decision is generating some opposition, notably from the United Auto Workers union, which issued a statement advising the maker it “should reconsider this decision and place this product into one of their facilities in the United States.”

Set to make its formal debut at the North American International Auto Show in Detroit next month, the Envision will become the latest – and the smallest – in an expanding line-up of crossovers sold by the Buick brand in the U.S.

The decision to market the vehicle as a Buick – originally reported by TheDetroitBureau.com earlier this year – comes as little surprise. In fact, GM officials routinely credit the Chinese with saving the Buick brand. 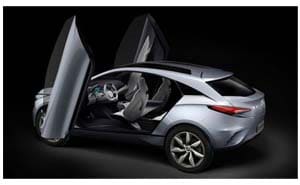 Buick first showed a concept version of the Envision with gull-wing doors. However, it's coming to the U.S. now ... sans gull wing doors.

(Click Here for details about GM’s plans to import vehicles from China.)

GM’s overseers gave serious thought to killing off the long-troubled marque during the parent company’s 2009 bankruptcy. But they decided to let it live in order to avoid tarnishing the Buick name in China where it has become one of the market’s largest brands.

The Chinese market has developed significant clout in Buick planning. The wildly popular Avenir concept vehicle, which debuted at the 2015 Detroit Auto Show, was primarily designed as a halo car for China, according to GM sources. And Mark Reuss, the maker’s global product development chief, said that potential demand in China will be a key factor in determining whether to eventually put Avenir into production.

GM is the second-largest manufacturer in that market, behind only Volkswagen AG. It has been rapidly expanding capacity there and, until recently, was struggling simply to meet Chinese demand. But the ongoing slowdown in that market has led GM – along with other manufacturers – to start studying export opportunities.

A number of domestic Chinese brands have promised to enter the U.S. market in recent years, but they have so far failed to make that happen. Quality problems have been one of the key factors behind the delay.

Geely, which set up a U.S. headquarters several years ago, is taking an alternative route to the American market. Its Swedish-based Volvo subsidiary began marketing the S60 Inscription this year. The vehicle is produced only at a Volvo plant in Chengdu, one of two Chinese plants the carmaker operates.

As for the Buick Envision, analysts suggest there are several reasons why it will be imported. Among other things, most of GM’s North American plants at operating at – and even above – rated capacity as U.S. sales surge to an all-time record this year.

There is, of course, also the issue of cost. And while Chinese workers have won sizable wage hikes in recent years, the overall cost of manufacturing there is still lower than trying to produce Envision in the U.S. The product also could come to market faster, as GM’s Chinese plants are already tooled up for the new SUV.

The big question will be quality. While studies show Chinese-made products have improved significantly in recent years, it remains to be seen if the new Buick will meet the increasingly tough expectations of American buyers.

The new Buick Envision, which will go on sale as a 2017 model, is expected to compete with Products like the Acura RDX, Audi Q5 and, domestically, the Lincoln MKC. Buick’s sibling Cadillac division recently announced it will add a similar-sized model before the end of the decade. It’s unclear whether that luxury model will be produced in the U.S. or abroad.