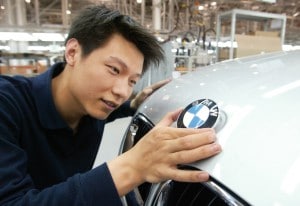 Auto sales in China were up 13.3% in October: the biggest year-over-year sales increase of 2015.

After months of reports about the slowing of auto sales in China, the country followed the lead of the U.S. enjoying a huge rush of October sales and netting a 13.3% increase over year-ago figures.

The jump to 1.9 million units comes after the government introduced cut in the sales tax on vehicles with engines with displacement of 1.6 liters and smaller to 5%, which is half of what it had been, according to the China Association of Automobile Manufacturers.

Another growth area for the country was Chinese brands, such as Great Wall Motor, whose sales rose 14% for the month, prior to now, had been pushed aside in favor of foreign makers.

Automakers – both Chinese and foreign – have struggled to find away to bolster sales in the country that has been counted on for strong results for the last five years.

There had been plenty of warnings that vehicle sales would slow this year as the government instituted new programs aimed at controlling China’s meteoric economic growth. Most expected sales to drop to a 7 to 8% increase in 2015; however, the drop was more severe: less than 6% until last month.

However, some analysts revised their initial predictions down to less than 2% after back-to-back declines in sales results during the summer.

The move to spark sales was effective and the cut will remain in place into 2016; however, sales are well off their peak growth of 45% in 2009.

Sales of battery electric and plug-in hybrid passenger vehicles in October were up 850% and 200%, respectively, than a year ago, according to the Ministry of Industry and Information Technology. Total vehicle sales, including trucks and buses, rose 11.8% to 2.2 million units.