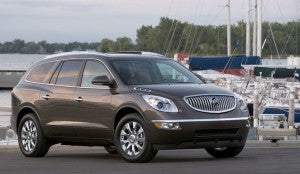 The 2012 Buick Enclave is one of the various GM crossovers covered by the liftgate recall.

Capping a week that already has seen some massive recalls, General Motors has announced a new service action covering 686,000 midsize crossover-utility vehicles because their rear liftgates could fail.

According to a report posted on the National Highway Traffic Safety Administration website, the affected vehicles are equipped with power liftgates whose gas struts may prematurely wear out. If that happens, the hatches could suddenly and unexpectedly fall.

The maker switched to a new strut design in spring 2012 that is less vulnerable to dirt and wear.

GM and NHTSA have received reports of 56 injuries related to the problem.

Owners will be directly notified in the coming weeks and will be offered free repairs that including replacing the suspect struts and updating the software that controls operation of the liftgates to prevent rapid closing.

(NHTSA under fire for its handling of numerous safety investigations. Click Herefor more.)

The auto industry set an all-time recall record in 2014, with more than 60 million vehicles impacted in the U.S., about half of them sold by various GM brands.

While it’s unclear if the industry will set another record in 2015 the pace of recalls has remained frenetic. Since just the beginning of the month Hyundai has called back 140,000 Sonatas due to seatbelt issues, Ford has recalled 432,000 vehicles due to body control issues – a move that marked the 17th recall for the current-generation Ford Escape – and GM recalled 2000,000 older Hummer SUVs due to fire problems.

(For more on the latest Honda airbag recall, Click Here.)