Further recalls could be possible. 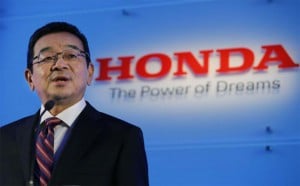 Already having recalled more vehicles for defective Takata airbags than any other manufacturer, Honda Motor Co. is adding another 4.5 million vehicles to its global tally, it announced today.

More than a third of those vehicles were sold in Japan, according to Honda, which noted that none of the affected vehicles are in North America. Until recently, the U.S. and Canada constituted the bulk of the recalls involving Takata airbags, but the latest announcement from Honda suggests the problem is much more widespread.

The latest recall appears to bring the total number of vehicles impacted by faulty Takata airbags to more than 40 million worldwide. At least eight deaths have been directly linked to the problem, all in Honda vehicles. So far, all but one occurred in the U.S. But it remains to be seen if more fatalities will be added to the list as manufacturers expand the scope of their recalls abroad.

The problem with Takata airbags has been linked to improperly manufactured inflators – the explosive portion of the safety system used to rapidly inflate the bags when a collision has been detected by a vehicle’s sensors. If the bags inflate over-aggressively, that can send metal and plastic shrapnel flying into the passenger compartment.

The latest Honda move followed a move by the maker to collect and analyze 1,000 Takata-made airbags from vehicles not covered by previous recalls. The analysis revealed wide variance from the normal amount of gas-producing chemicals used in the airbag inflators.

At least 10 different manufacturers from Japan, Europe and North America have been impacted by the Takata airbag problem, which has rapidly expanded in recent months. But Honda has had the largest number of vehicles affected of any auto company, in part due to its close relationship with Takata.

In turn, that has seriously hammered the bottom line for Japan’s third-largest automaker. Following a sharp downturn in earnings for the fiscal year that ended March 31, Honda CEO Takanobu Ito announced his retirement. He was formally replaced by Takahiro Hachigo last month.

The new Honda CEO today told reporters in Tokyo that the carmaker is continuing to address the problem. It is unclear if that means further recalls might follow.

Takata is itself facing serious financial problems that some analysts believe could force it to eventually declare bankruptcy.

The parts supplier has been seriously criticized for its handling of the airbag issue. Until recently, it resisted calls to greatly expand the number of vehicles covered by recalls, initially challenging an order by the U.S. National Highway Traffic Safety Administration.

The company was skewered by lawmakers during a Senate Commerce Committee hearing last month during which Takata was pressed to set up a victims’ compensation fund. That would be similar to the fund established by General Motors to compensate for the death or injury of those affected by faulty ignition switches.

A day later, Takata CEO Shigehisa Takada made a rare public appearance at a news conference in Tokyo to express his regrets for the problem while insisting the cause was still under investigation.

Despite the problems with its airbags, Takata has said it will continue to use explosive ammonium nitrate to power its inflators. During last month’s hearing, Senator Bill Nelson, D-Fla., pushed Takata to explain why since other suppliers have moved to other chemicals.

“Instead of this airbag saving lives, it is killing people,” Nelson said.

(NHTSA under fire for its handling of numerous safety investigations. for more.)