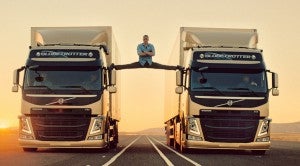 Forget the rocks and trees, or SUVs trampling across the meadows, and ignore the fast-talking salesman pitching a deal too good to be true. Occasionally, just occasionally, an automaker’s creative team really does come up with an ad so compelling that you might want to watch it more than the show it is sponsoring.

Honoring standout ads, whether on TV, the Internet, billboards, or in print, is the mission of the non-profit One Club, which sponsored the One Show Auto Advertising Awards presented as a wrap-up to two days of media previews at the North American International Auto Show.

Humor is a universal theme, it seems, often helping us poke fun at ourselves. Audi was one of the winners in the broadcast category, its TV spot, called “Scripted Life,” likely to resonate with anyone who has felt like they are forced to conform too much.

But what happens when you stop worrying about pleasing the boss, or saying just the right thing at a dinner party? In this instance, a beautiful woman in conveniently pulls up in an Audi Q3 and takes you on the ride of your life. 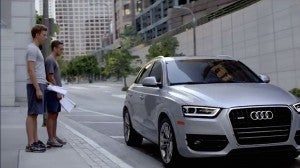 Audi's "Scripted Life" commercial for the new Q3 took home an award from One Club.

The judges of the One Show Awards found themselves all but deadlocked in the TV category, and, in an unusual move, declared three winners. Another light spot showed the grueling tests that Australian motorists apparently have to go through to be considered suitable to own an “Unbreakable” Toyota Hi-Lux.

The third winner, which aired during last year’s Super Bowl, took a more familial – if still humorous – tone. Dubbed “Dad’s 6th Sense,” it showed how an accident-prone youngster barely makes it to driving age thanks to a father who just happens to be there every time he’s about to get into trouble. But, as he begins driving, it’s the collision warning system on the family Hyundai that saves him.

Reflecting the fast-changing media world, the One Show Auto Advertising Awards included a number of so-called “new media” categories, including online video. There, the winner seemed all but preordained, the Swedish spot for Volvo Trucks that defines the term “going viral.” It shows action movie star Jean Claude van Damme doing a split between two 18-wheelers – which happened to be driving backwards. And it’s been viewed nearly 80 million times – a record – on YouTube.

Honda, meanwhile, was honored for an intriguing British-made interactive spot, “The Other Side.” It focused on a seemingly ordinary family’s average day. But tap the keyboard and you got a very different picture of the same family.

One of the more intriguing spots picked by the One Show jury was the winner of the Experiential category, which honors great live stunts, installations and other promotions actively involving an audience. In this case, they were movie-goers watching a seemingly innocuous driving scene. Suddenly, hidden technicians triggered all the cellphones in the theater to go off. But as the audience turned to look down for a message, the car suddenly crashed with a tremendous bang, a message on the silver screen warning of the dangers of texting and driving.

(Click Here for details on Tesla’s proclamation it won’t be profitable until 2020.)

Traditional advertising still matters, and it offers opportunities for intriguing creativity, like that shown by Jeep in a series of magazine ads called “Upside Down.” Each of the six showed one animal, but turned upside-down a very different animal suddenly appeared, an elephant’s head transformed into a giraffe.

How well these various winners succeeded in selling product wasn’t part of the judging criteria. But they all succeeded in catching an audience’s attention.

This story originally appeared in the Detroit News.