FCA leader expects brand to hit the mark by 2018. 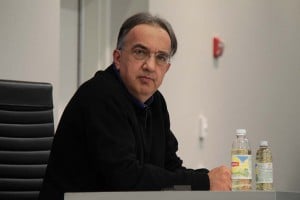 FCA Chief Sergio Marchionne is at it again. After Jeep met Marchionne’s goal of selling 1 million vehicles in 2014, he’s thrown out another sales target: 1.9 million Jeeps. Fortunately, he’s given the rugged off-road brand until 2018 to hit the mark.

“This is the goal,” added Marchionne, who favors bold announcements.

Marchionne laid down the new objective during an informal chat with reporters after his annual press conference at the North American International Auto Show. It was during this chat at last year’s show that Marchionne predicted that Jeep sales would reach 1 million units in 2014 even though FCA, then known as the Chrysler, was struggling with the launch of the Jeep Cherokee.

Once Chrysler got beyond the difficult introduction, the Cherokee proved to be a major hit, adding substantially to the company’s volume despite the teething problems.

Marchionne noted FCA is ramping up Jeep production at a factory in Italy and should have a new Jeep factory in Europe by the end of the year. The addition of new models, such as Jeep Renegade, will bolster sales volumes.

In addition, FCA is also looking at ways to increase production of the Jeep Wrangler as it prepares to roll out an updated version. The company is in the midst of reviewing if the next generation Wrangler could be built at the current Wrangler plant in Toledo, Ohio.

Marchionne, who has proven considerate of local pride and history in making plant decisions in the past, said he would prefer to keep the Wrangler in Toledo where half of all Jeeps sold around the world are now built. However, the business case has to work, he said. The final decision will have to make in the next few months so the Wrangler project can move forward, he said.

Meanwhile, FCA is ramping up production of the Jeep Renegade and Fiat 500X at an assembly plant in Melfi, Italy, where it is recalling workers to fill 1,000 additional jobs at the plant. “Results for the new Jeep Renegade and Fiat 500X, which have been extremely positive, will enable the addition of 1,000 new workers at the Group’s Melfi plant,” FCA said in a statement released from the company headquarters in London.

Marchionne also said the new Jeep plant in Brazil, near Recife, will be ready in the spring. The new plant is scheduled to build a variant of the Renegade. “It’s a Jeep but it’s a Jeep with a Brazilian flavor,” Marchionne said during an appearance at the Automotive News World Congress.

Mike Manley, president of the Jeep brand, said FCA also expects to have plant in China ready to build Jeeps before the end of 2015. The plant will build the Jeep Cherokee exclusively for sale in China, said Manley, adding he expects Jeep to set its fourth consecutive global sales record in 2015.

(To see more about Ford’s bombshell that it will produce a new GT supercar, Click Here.)

The European launch of Renegade one of Jeep’s crucial tasks this year, Manley said during an interview at the NAIAS.