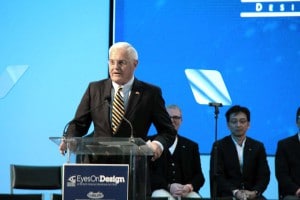 Ford’s GT and the Buick Avenir concept were the big winners, though Audi also took home honors for its redesigned Q7 sport-utility vehicle.

The annual awards ceremony is meant to honor the best in automotive design, something former General Motors “car czar” Bob Lutz described as the “great differentiator” in a world in which vehicles share more and more of the same, underlying technology.

“My whole career was on the side of the designer,” said Lutz, who spent the last decade of his long career as GM’s product development chief, where he helped revive the importance of styling.

The 83-year-old industry veteran was honored with the annual “Catalyst Award” for promoting the role of design and individual stylists. Lutz told attendees that he was really something of a frustrated designer himself, but “when I showed my father, a Swiss banker, some of my sketches, he told me, ‘You better get a day job.’”

Audi was honored for the interior of its 2016 Q7. The German maker has long been acknowledged as one of the benchmarks in interior design.

(Click Here for details about Verizon’s plans to connect to your vehicle.)

While the wildly popular Buick Avenir concept, also debuting at the Detroit Auto Show, had to settle for runner-up status in the Interior Award category, it claimed victory for “Best Use of Color and Graphics.”

(To see why Lincoln changed the “new car smell” in its new MKX, Click Here.)

But it was Ford that claimed what is arguably the most prestigious award, for “Best Production Design. That trophy went to the Ford GT, an unexpected unveiling at the auto show. Planned to go on sale in 2016, it was an almost accidental project, Ford senior management deciding to use a supercar as a way to tied together the various advanced R&D efforts underway at the company.

Presenting the Ford team with its trophy, former Ford design director Jack Telnack declared, “This really was the pinnacle of engineering and design.”