15 GM employees, half at senior level, are terminated as maker prepares to launch victim compensation program. 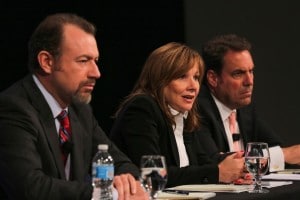 A pattern of “incompetence and neglect” led General Motors to ignore for a decade a problem with a faulty ignition switch linked to the deaths of at least 13 people, CEO Mary Barra acknowledged on Thursday, during a news conference called to respond to an outside probe of the problem and, more broadly, GM’s overall handling of safety-related issues.

The investigation by former federal prosecutor Anton Valukas was harsh in its assessment, though the final report cleared Barra and predecessor Dan Akerson of involvement in the scandal. It did, however, point to a number of other engineers, managers and senior executives who failed to take the appropriate actions that could have caught the defect years earlier. As a result 15 employees have been terminated, with another five disciplined.

Over half of those were employed at the “senior or executive level,” according to Barra. 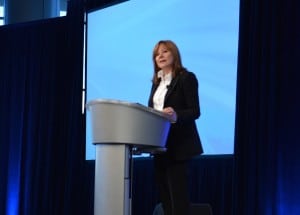 The embattled Detroit maker also noted that it is moving ahead rapidly to set up a special compensation fund “for all those” who have been killed or injured due to the ignition switch debacle, noted GM President Dan Ammann. And while the carmaker continues to maintain at 13 the number of fatalities linked to the ignition switch defect, Ammann said additional victims could be added to the list. A report by the Reuters news service this week contended that the death toll might actually be 74.

It was “enormously troubling to see our shortfalls laid out so thoroughly” by the Valukas report, said CEO Barra during a speech to more than 1,000 employees at the GM world headquarters in Detroit’s Renaissance Center.

Barra, who was named to replace Akerson late last year, acknowledged that the report revealed a “fundamental failure” to respond to a critical safety issue, then promised that, “We will do the right thing for those who were harmed. We will accept responsibility and make sure that this never happens again.”

The Valukas report took a microscope to GM’s ignition switch problem, while also more broadly examining the automaker’s process of dealing with safety-related issues. It found major flaws across the board.

From the very beginning, employees mishandled the ignition switch issue, failing to flag that the part did not meet GM’s own performance standards. The basic issue is that the switch was prone to occasionally moving out of the Run position, into either ACC or Off. If that happened, a vehicle’s engine would cut out, while the airbag system would be disabled. According to Barra, it was handled as a “customer satisfaction” issue, rather than a safety matter – even after the maker began receiving reports that the defect had resulted in crashes and fatalities.

And then, around 2005, GM employees ordered a revision to the part without following normal procedures, notably by maintaining the same part number which failed to flag there was a problem that might have triggered a recall years earlier. The service action was only announced in February of this year, ultimately impacting 2.6 million vehicles sold in the U.S. alone.

From a 35,000-foot viewpoint, the report found a number of fundamental flaws in the GM safety system:

But she also stressed that the report by Valukas – who previously issued a widely respected study of the collapse of financial firm Lehman Brothers – found “no conspiracy” at General Motors to cover up the switch defect, nor did it conclude that GM held off on an earlier recall because it put profits ahead of safety, a frequent claim by the maker’s critics.

The Valukas report contains about 90 recommendations, and Barra noted that a number of critical steps have already been taken, among other things GM creating a post for a global safety czar while shifting its reporting process so that safety issues are quickly brought to the attention of the CEO, President Ammann and global product development chief Reuss.

The changes have already resulted in a more aggressive policy on recalls, GM now up to about 30 separate actions since just the beginning of the year, with the total number of vehicles impacted naring 15 million, an all-time record for the maker. And Barra signaled there likely will be at least a few more recalls in the “near-term.”

The financial impact has been significant already, the maker taking a $1.3 billion write-off during the first quarter and planning for another $400 million hit during the current quarter. But even bigger costs loom. Among other things, GM faces a Department of Justice probe that some expect could lead to criminal charges and fines that could top $1 billion – that figure based on the penalty levied against Toyota Motor Co. earlier this year because of its own safety problems.

Meanwhile, the maker says it will issue what is essentially a blank check to Kenneth Feinberg – who oversaw victims’ compensation funds for the 9/11 attacks, the Boston Marathon bombing and the BP Gulf oil spill and who is currently setting up a similar fund for victims of the ignition switch issue.

“Our goal is to do the right thing here and compensate anyone who deserves to be compensated,” said Ammann, declining to put a figure on what that might cost.

(Click Here to get additional details about GM’s internal investigation.)

He declined to say whether additional names could be added to the list of the 13 now acknowledged to have been killed due to the defect, saying Feinberg will make that determination. But a Reuters study raised the number to 74, and there has been widespread reporting about Brooke Melton, who was killed in a crash of a Chevrolet Cobalt in 2005 allegedly caused by the defect. She is not currently counted among the 13.

(To see how the death toll attributed to GM’s recall could rise to 74 people, Click Here.)

Within GM, the impact is also being felt on an individual level. The maker previously had suspended two engineering managers who reportedly failed to respond to information revealing the ignition switch problem. They have now been terminated, along with 13 others, including a “disproportionate number (who) were in senior roles or executives,” revealed Barra.

The maker says it won’t release any names, but it has been widely reported that the two who were previously suspended are switch engineer Ray DeGiorgio and development engineer Gary Altman.

Going forward, they and others within GM could face potential criminal charges. Barra said the new Valukas report has been turned over to Justice Department investigators, as well as those spearheading separate investigations by both houses of Congress. Barra appeared before separate hearings on Capitol Hill and may be called back for further testimony, she noted.