Terminations deemed incompetent or failed to be accountable. 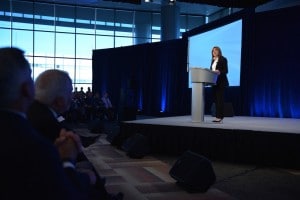 GM CEO Mary Barra outlines the findings of the investigation of the automaker by former U.S. Attorney Anton Valukas.

GM Chief Executive Officer Mary Barra said that the employees are no longer with the company and included employees from several different departments.

“For the most part they were on the senior level,” Barra said.

The fundamental problem was that the employees allowed a part that didn’t meet specifications to go into production and secondly didn’t understand how the faulty part could have interacted with other critical systems such as the airbags.

“They were deemed incompetent or they didn’t understand their role in the company,” said Barra, who also insisted there was no conspiracy among employees to cover up the ramifications of the faulty part.

At least some of the employees involved in the house cleaning came from GM’s legal department, but she said the company’s top lawyer is still with the company.

“Overall the report found that, from start to finish, the Cobalt saga was riddled with failures which led to tragic results for many,” Barra said, adding there was no evidence that any employee made a trade-off between safety and cost.

Mark Reuss, GM vice president for product development, said in many cases the terminated employees did not look at the impact on the entire vehicle. GM now has a system in place that will prevent the problem from recurring again, he said.

“We have strengthened the product development process,” Barra said. “In the case of the Cobalt, it was clearly a safety problem,” added Barra, who declined to say how many employees were actually dismissed or forced to retire since many of them had accumulated years of service with GM.

“There has been dramatic change at General Motors,” Barra said. “There is a commitment to do great vehicles. A culture doesn’t change overnight. It’s a journey,” she said, adding afety and quality are critical.

“We will be a better company,” she said. “Our employees are disappointed. They want to build great cars, trucks and crossovers.”