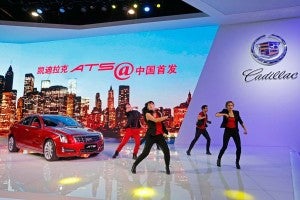 Hoping to build momentum in what is rapidly becoming the world’s largest luxury car market, Cadillac is introducing its compact ATS model into China where it will join the bigger XTS model introduced earlier in the year.

For now, however, the smaller of the two luxury cars will continue to be imported from the U.S. which means buyers will have to pay a premium in the form of import duties. Caddy began producing the XTS model in China this year.

The ATS, which Cadillac bills as a luxury sports sedan, is making its official debut at the Auto Guangzhou 2013 car show in Southern China. The imported model will be offered in four trim levels along with five exterior and two interior color options, and will be priced from $52,000 to $72,000, General Motors officials said.

“The ATS incorporates Cadillac’s latest achievements in design and technology,” declared Shanghai GM President Wang Xiaoqiu during the launch ceremony. “It is visually stunning and extremely maneuverable, breathing new life into its segment.”

(Cadillac to unveil ATS Coupe at January’s Detroit Auto Show. Click Here for the inside story.)

The ATS was introduced in the U.S. in late 2012 and quickly ran up a string of kudos, among other things being named North American Car of the Year, the Red Dot Design Award, Esquire’s Car of the Year and Popular Mechanics’ 2013 Automotive Excellence Award. Now Caddy hopes to repeat its initial success in China. GM has been one of that booming market’s strongest players over the last decade but lags in a luxury segment dominated by rival Volkswagen AG’s Audi brand.

“The ATS complements the rest of our Cadillac lineup, which includes the XTS and SRX. It will further accelerate the luxury brand’s growth in China,” said Shanghai GM’s Wang.

GM hopes to more than triple Cadillac sales across China over by the end of 2015. Cadillac sold just 30,000 vehicles in China in 2012 but has set its sights on topping 100,000 sales annually by the end of 2015 as it adds new models, including the ATS and Cadillac ELR, GM’s newest extended range electric vehicle, GM officials have said. (The similar, but more mainstream Chevrolet Volt is already on sale in China.)

Even then, Cadillac will lag well behind the competition.  By comparison Audi sold  405,838 vehicles in China last year, BMW sold 327,341 and Daimler AG’s Mercedes-Benz division rang up sales of 196,211 vehicles, according to company figures.

Cadillac’s dealer network in China has doubled to more than 150 locations in the past year. It is planned to reach 250 outlets by the end of 2014.

GM, now the largest foreign automaker in China, is also spending $1.3 billion to build a new Cadillac plant in Shanghai that will eventually prduce the ATS. The plant would allow GM to avoid paying China’s 25% import tariff, a critical factor as it seeks to bolster Cadillac sales in the country.  GM and its principal Chinese partner began building the full-size Cadillac XTS on an assembly line in Shanghai earlier this year to avoid the Chinese tariff.