Actual numbers could be more than four times what officials claim. 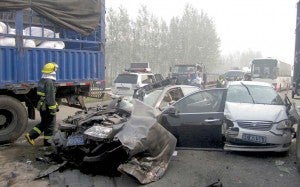 A routine sight on Chinese roads.

When nine people were killed and 76 other injured during a massive pile-up in China’s Anhui Province over the weekend it barely made the headlines.  After all, it was just another in an ever more common tally of fatal accidents in what is now the world’s largest automotive market.

According to new statistics from the World Health Organization, an estimated 275,000 people were killed on China’s roadways last year.  That’s nearly nine times more than died in the U.S. – even after a slight, unexpected surge in American highway deaths during 2012.  That figure is more than four times higher than the official government number, 60,000 traffic fatalities last year.

Even adjusting for the fact that China has four times the U.S. population, the total is astounding, accounting for 20.5 citizens out of every 100,000.  The American death rate is 11.4 per 100,000. And that doesn’t even account for the fact that China still has barely a third as many cars as the U.S., and its citizens clock far fewer miles than the 12,000 to 15,000 average in the States.

Only a handful of countries, including Argentina, Iraq, El Salvador and Chad, suffer a higher percentage of their populations killed in automobile accident each year.

“So, if the number of cars in China doubled by the end of the decade, as it’s expected to, so could the number of traffic fatalities,” cautions auto analyst and broadcaster John McElroy, host of the program AutoLine.

(U.S. highway death toll falls sharply during first half of 2013. Click Here for the full story.)

There’s been a significant focus on China’s air pollution problem in recent years, smog in major cities like Beijing registering off the charts during some of the worst days this year.  That’s been at least partially linked to emissions from the country’ fast-growing automobile population. In fact, Beijing recently announced plans for a significant reduction in what was already a strict limit on new vehicle registrations.

Beijing, Shanghai and other so-called Tier I cities have also been struggling with serious and worsening traffic congestion problems that, in turn, are blamed for the surge in traffic fatalities, according to government regulators and analysts.

“The road transport safety situation is very grim,” acknowledged the Chinese Transportation and Communications Ministry, following the death of 41 people when an intercity bus caught fire in Henan Province in July 2011. The situation has only grown worse since then.

Worse, the New York Times estimates that “only a fraction” of all highway deaths actually show up on the books due to what is considered “widespread underreporting” by authorities.

“The belatedness and approximate nature of the disclosure increase the suspicion that the government fudged the data,” reported the industry website ChinaAutoWeb.

A 2010 study by the Johns Hopkins School of Public Health in Baltimore and the Central South University in Changsha, China, found showed nearly three times as many recorded by the country’s Health Ministry as were officially reported by police.  And various reports indicated even those figures might fall short of the true total.

There are a number of reasons blamed for the skyrocketing carnage. Massive traffic problems clearly don’t help. Nor does a general lack of driver training worsened by irregular enforcement by police.  A search of Youtube videos will reveal any number that show the frenetic pace at key intersections across the country.

During a visit to the central Chinese mega-city of Chengdu, last July, we witnessed 100s of motorists, whether driving motorbikes or buses, minivans or sedans, blithely ignoring both the traffic lights and a pair of overwhelmed traffic cops, traffic surging into a key intersection from all four directions, vehicles regularly avoiding collisions by mere millimeters.

The safety of Chinese vehicles has also been called into question.  While manufacturers like General Motors, Volkswagen and Toyota routinely use similar designs to those they offer in other parts of the world, many Chinese models are sold without the latest safety equipment, such as the wide array of airbags and newer collision avoidance systems.

Meanwhile, homegrown Chinese brands have been faulted for falling well short of the crash capabilities of their Western competitors.

Poor road designs and irregular maintenance have also come in for blame.

While some government officials appear hopeful that by downplaying the numbers the problem will go away, others want to address the auto safety issue head on. Indeed, as has happened with the worsening Chinese pollution problem, increasingly bold local media have been speaking out, one station showing gruesome crash video intended to scare drivers – especially the young – into behaving better on the road.

Whether that will have an impact remains to be seen, but as more and more Chinese take to the roads each year, the country’s deadly epidemic is growing more worrisome.