Maker working on cost while ensuring safety of vehicle. 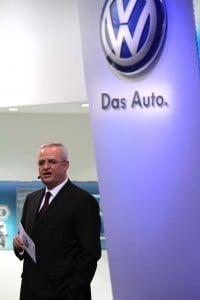 VW's Martin Winterkorn said earlier this year the company plans to have a budget brand for China.

Volkswagen looks to have its “budget” brand ready to roll next year in China with other markets possibly getting variants of the vehicles.

The German maker recently reiterated its plans to bring a lower-cost, localized brand to China: a strategy similar to other foreign automakers in the country.

During the North American International Auto Show in January CEO Martin Winterkorn said VW would be ready to make its intentions known by the end of the year, but VW brand development boss Dr. Heinz-Jakob Neusser has said in recent reports that the company is still doing its homework in a budget lineup for China.

The biggest factor it’s dealing with is cost. The idea to have a vehicle built in China and to sell it for less than $9,000.

The new lineup will not be badged as Volkswagens, again following the pattern of Nissan with its Venucia brand and General Motors with Baoyun.

The vehicles could find their way into other markets, such as India. Again, they would likely follow the pattern of others, such as the aforementioned Nissan, which recently revived its Datsun moniker for low-cost vehicles it plans to sell there. It started with the Go, a small hatchback.

“We are conceptually developing the budget car, but we haven’t decided up to now go into production development,” Neusser told the website, Auto Express. “We are still working on the cost side, and that is the biggest issue. We will only make this car when it is profitable.