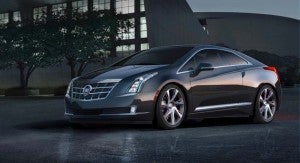 Cadillac is looking at adding other battery-based vehicles that would follow the ELR plug-in, shown here.

Even though its new plug-in hybrid, the Cadillac ELR, is still nearly two months from launch, the Detroit luxury maker is giving serious thought to adding more battery-based vehicles to its line-up, TheDetroitBureau.com has learned.

Other models could include an even larger and more upscale offering than the compact ELR, confided Caddy’s global sales chief Bob Ferguson, who said the technology could generate significant interest among buyers – both at home and abroad – who don’t have General Motors’ flagship brand on their radar screens.

In a wide-ranging discussion, Ferguson also told TheDetroitBureau.com that there is growing support inside GM for transforming the well-reviewed Elmiraj concept vehicle into a production vehicle – and as quickly as possible, though formal corporate approval is not yet a certainty.

“I’m so optimistic about how well (the Cadillac ELR plug-in) will do, especially on the West Coast and in the Northeast,” said Ferguson during a one-on-one discussion with TheDetroitBureau.com. “It will bring us a lot of new customers, I’m sure.” 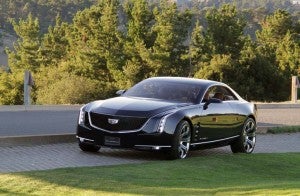 Cadillac rolled out the Elmiraj Coupe Concept during the Pebble Beach Concours in August.

The ELR is the production version of the Cadillac Converj concept vehicle – and the third GM product to use the maker’s Voltec plug-in hybrid platform, following the earlier introductions of the Chevrolet Volt and Opel Ampera models. But at $75,995, including a $995 destination charge, the Caddy model will target a much more upscale audience and, GM is hoping, will tap into what has become one of the fastest-growing markets for battery-based products, the same, green-minded luxury buyers who have been driving the unexpected demand for the Tesla Model S battery-electric sedan.

(For more on the new Cadillac ELR, Click Here.)

For his part, Ferguson said he is pleased with Tesla’s success, which he sees as helping build up the overall market for electric propulsion.  But GM Chairman and CEO Dan Akerson has also suggested in recent months that Cadillac will eventually take aim at its upstart rival.  The Detroit maker is reportedly working up a longer-range battery-car that will be able to more directly compete with the Model S which, with its optional 85 kilowatt-hour battery, can deliver nearly 300 miles per charge.

“We’re bullish on this technology,” emphasized Ferguson, adding that “This will lead to a progression of (battery-based) cars for Cadillac.”

While he stressed it’s “too early” to discuss plans in detail, Ferguson did suggest that, “I could certainly see a larger vehicle, something even more luxurious” that would also use an extended-range electric platform, like the Chevrolet Volt or the newer Caddy ELR.

The latter model will carry over the Chevy model’s basic technology, including Volt’s 16.5 kWh battery and its 1.4-liter gasoline “range-extender” engine.  But sources at GM have indicated an updated hybrid driveline is in the works, one that would adopt a next-generation battery and a more advanced internal combustion engine.  That revised combination is expected to debut on the generation-two Volt and possibly on other GM plug-in models.

There are several reasons behind GM’s strong push for electrification: the maker clearly wants the credits such vehicles would provide as offset against the rapidly rising mileage and emissions standards being enacted in the U.S. and abroad. But there’s also the potential such products serve as “halo” vehicles, according to Ferguson.

(Click Here to find out more about what GM plans for its expanded battery lab.)

GM continues exploring other “green” options, including hydrogen fuel cells, and the Cadillac global sales boss revealed that the luxury brand is “working” on getting a diesel into its U.S. line-up. It already offers “oil-burner” technology in Europe, where diesels now constitute more than half of the luxury market.

On a separate, but equally significant topic, Ferguson confirmed that Cadillac is moving ahead on plans to add a new flagship model above the XTS sedan, noting, “”I’m very excited about the reception for the Elmiraj,” the long and sleek concept coupe Cadillac first rolled out during the Pebble Beach Concours d’Elegance this past August.

The luxury brand is currently working up a business plan to present to the GM corporate-powers-that-be, and there are still a number of issues to be dealt with in justifying the transition from concept to production car. But Ferguson said, “I’d like to see it in showrooms as soon as possible.”

What should help make the case at least a little bit easier is the fact that Elmiraj “wasn’t made just to be a concept car,” said Ferguson. “It was made to be operationalized.”

That’s auto-speak for a concept that is based on a real platform and which had production intentions in its design from the get-go.  That said, it would still require a lot of tweaking and testing before the big coupe could roll down the assembly line.  How long might that take? Ferguson didn’t have an answer but one might consider the transformation of the Converj into the Cadillac ELR.  The new plug-in hybrid will go on sale barely 30 months after the program was giving the go, a fast pace compared to the industry’s normally glacial pace of product development.