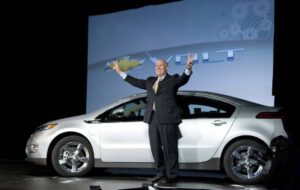 It builds fewer cars per quarter than General Motors produces in its pickup truck plants in a matter of days, yet the giant Detroit automaker is increasingly focused on the California battery-car start-up.

That has led GM to launch a study of its little rival’s strategy and technology – and to lay out plans for its flagship brand to take on Tesla with a high-mileage battery car of its own.

“If you want to compete head-to-head with Tesla, and we ultimately will, you want to do it with a Cadillac,” GM Chairman and CEO tells the Detroit News.

GM has been struggling to gain ground in the nascent battery-car market with offerings like the Chevrolet Volt and Opel Ampera plug-in hybrids, as well as the new Chevy Spark battery-electric vehicle. It is preparing to launch its first battery-based offering for the Cadillac brand, the new ELR plug-in, and last week, company officials revealed they are working on a new battery-electric vehicle, or BEV, that would deliver at least 200 miles of range per charge. 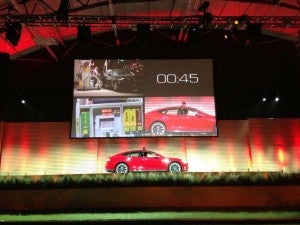 Tesla hopes to boost Model S sales with a network of Superchargers and a new battery-swap system.

So-called “range anxiety” has been cited by industry analysts as one of the biggest problems manufacturers have in generating interest among potential buyers. And the fact that it now offers two battery packs delivering more than 200 miles range is considered a major reason why sales of the Tesla Model S sedan have exceeded initial expectations and helped the start-up maker beat earnings forecasts for two quarters in a row.

Tesla is still a niche player, at best, producing barely 5,000 vehicles every three months, but the maker plans to steadily ramp up volume, with a second model due next year and lower-priced offerings under development.

Akerson took a shot at the California-based competitor, noting, “We’ll sell more (Chevrolet) Volts and lose less money on the Volts than they’ll lose on the (Tesla) Model S,” but Chevy’s plug-in has continued to lag GM’s initial expectations – as well as the sales of Japanese rival Nissan’s battery-electric Leaf model.

The reality is that, even when all forms of battery-based vehicles are combined, they account for barely 4% of total U.S. new vehicle sales this year. And when excluding conventional hybrids such as the popular Toyota Prius, plug-ins and BEVs generate barely 0.3% of total demand.

“I’m not convinced that an all-electric car is the panacea that I think the American public wants,” Akerson said.

Proponents contend that longer range is just one of the factors that are needed to boost demand for battery-based vehicles.  They point to the need for more public charging stations – especially high-speed chargers – and the need to bring the price down on electrified vehicles.

(VW aims to have 40 hybrids, plug-ins and battery-electric vehicles on the market. Click Here for the full story.)

Both GM and Tesla appear to be working on both challenges.  The smaller maker, for example, is setting up a network of 100s of so-called “Supercharger” stations across the U.S. and parts of Canada.  The industry giant, meanwhile, recently became one of the first makers to sign on to use a new high-speed charging system that would be shared across the industry.

As for price, Tesla hopes to have a more affordable electric vehicle out on the market in a few years, something that would reach a far more mainstream audience than the Model S, which currently sells for as more as $100,000 fully equipped.

Doug Parks, a senior GM global product development executive, said the maker wants to be able to price its 200-mile electric vehicle at around $30,000. That would require a significant drop in battery prices, however.  It takes around 65 kilowatt-hours of lithium-ion batteries to achieve that much range. When the Chevy Volt program was launched LIon technology cost about $1,000 per kWh. Advocates hope to see the technology dip to as little as $200 per kWh, about the most it could cost to allow GM to meet its goal.

While Tesla may be on GM’s radar, the little maker clearly has an eye on its Detroit competitor. After hearing about GM’s plans, Tesla founder and CEO Elon Musk tweeted, “Am happy to hear that GM plans to develop an affordable 200-mile range electric car. Right target. Hope others do same.”