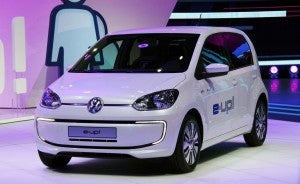 Volkswagen's e-Up! concept reflects the maker's turnaround about having electric vehicles in its lineup.

With the launch of the new e-Golf model at this year’s Frankfurt Motor Show, along with the smaller e-Up! model, Volkswagen AG begins a high-voltage push into the emerging battery-car market. And that’s just the start, senior VW officials promise.

Add in models as diverse as the plug-in hybrid Audi A3 Sportback and the new battery-assisted Porsche 918 supercar, and Europe’s largest automaker begins the process of rolling out a planned 40 hybrids, plug-ins and full battery-electric vehicles, or BEVs, by 2018.

So aggressive is the Volkswagen campaign that CEO Martin Winterkorn is projecting the maker will become the largest manufacturer of battery-based vehicles in the world, noting, “We have developed the know-how for electric motors and battery systems at our own components plants, we have recruited 400 top experts for electric traction and qualified almost 70,000 development, production and service employees in this new technology — the biggest electrification training program in our industry.” 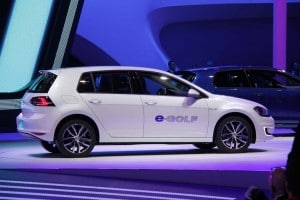 VW is expanding its lineup of electric vehicles and hybrids, including the e-Golf.

There are, however, plenty of skeptics who question that boast – especially those who find curious VW’s sudden conversion in favor of a technology that top officials were dismissing just a few years ago.

In 2010, Christian Klingler, VW’s board member responsible for sales, wrote off the technology during a roundtable session called to discuss battery technology, suggesting there was no real market interest in electric propulsion.

Has VW really made an almost religious conversion, going from battery skeptic to a major proponent? It’s hard to argue with the investment in both manpower and cash the German maker claims it is committing to the cause.

The “why” remains unclear. Certainly, Klingler hasn’t been the only industry planner to question whether there’s real consumer demand for electric vehicles. And even Carlos Ghosn, the CEO of Nissan and perhaps the industry’s most fervent proponent of battery power, acknowledged in Frankfurt that sales of vehicles like the little Nissan Leaf BEV are lagging way behind earlier forecasts.

Skeptics suggest VW has simply read the tea leaves and realizes it has no other alternative but to embrace battery power if it’s to meet increasingly tough emissions and mileage standards being enacted in major automotive markets including the U.S., Europe, Japan and China. In fact, the toughest of those rules, mandated by the California Air Resources Board, or CARB, would soon ban manufacturers who don’t sell enough so-called Zero-Emissions Vehicles in the populous state.

With no choice but to get into the game, it would seem, Volkswagen has decided to make a full court press. 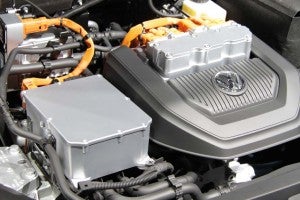 And it clearly isn’t a half-hearted move. “The empire charges back, declared senior executive Dr. Heinz-Jakob Neusser, during the eGolf unveiling.

The German maker is pushing with a variety of different technologies under development for a wide range of its dozen brands. The little e-Up! and only slightly large e-Golf will be its two mainstream battery-electric models. Audi is planning to roll out plug-in hybrid options for much of its expanding line-up, starting with the new A3 Sportback.

At the upper end of the spectrum is the $845,000 Porsche 918, a track-ready supercar that might shock those who think that electric vehicles are slow and boring. Combining a big V-8 and twin electric motors, the two-seater makes 718 horsepower and can charge from 0 to 60 in 3.1 seconds.

Even VW’s super-premium Bentley brand is working up a plug-in hybrid driveline that could be offered in the new ultra-luxury SUV it is developing.

It’s a potential fearsome assault, all in, but will it be enough to take leadership in the battery-car field?

While he acknowledged, “We have some competition to become the largest electric car maker,” Nissan CEO Ghosn downplayed the threat from his rival during his own appearance in Frankfurt. For the moment, at least, Nissan’s Leaf is the world’s best-selling pure battery-electric vehicle, and the Japanese maker plans to launch at least four more BEVs – along with a number of plug-ins and conventional hybrids – by decade’s end.

Ghosn is also CEO of Nissan’s French alliance partner Renault, which has aggressive plans of its own for converting to battery power.

Then there’s VW’s archrival Toyota. The Japanese giant is itself skeptical of the demand for plug-ins and BEVs due to the limitations of the current state-of-the-art lithium-ion batteries. But it is slowly adding more of these advanced models even as it works up the next-generation conventional hybrid that will be used in its best-selling Prius model. Toyota currently has 23 different gas-electric models on sale around the world – with more coming – and will generate well over half of all hybrid vehicle sales this year.

It’s no more likely than Nissan to cede leadership.

But while late to the table, VW is clearly not intent to be a battery market afterthought. And that means a tough battle ahead.

Ironically, the winner could be consumers, suggested Nissan’s Ghosn during a Frankfurt news conference. The more product available the better battery technology will likely to become while the increase in availability should also help drive costs down. And that, he contends, will help the technology reach a 10% share of the global market in the next decade of so.