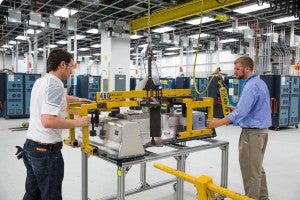 Facing increasing competition in the battery car market as global makers like Nissan, Volkswagen and Toyota begin fielding an array of hybrids, plug-ins and pure battery-electric vehicles, General Motors has launched a major expansion of its battery development lab.

The move could prove critical not only in going up against GM’s traditional competitors but also new players in the alternative powertrain space, such as California battery-car start-up Tesla Motors. GM has confirmed plans to develop a vehicles that will deliver the extended range to challenge Tesla’s well-reviewed Model S.

The research lab will also target ways to reduce charging times in an effort to make plug-based vehicles more practical in everyday use.

“GM is committed to vehicle electrification and our products in this area must continue to excite customers. A critical part of this plan is to deliver safe, reliable and affordable energy storage systems,” said Larry Nitz, GM’s executive director of global electrification engineering.

“The new capabilities of this lab will enhance our engineers’ ability to design, develop, process and validate class-leading products to meet the needs of our growing customer base,” Nitz added.

GM has effectively tripled the size of its Global Battery Systems Laboratory at the company’s technical center in Warren, Mi. The addition of some 50,000-square feet of space cements the lab’s stature as the largest battery lab in North America owned and operated by a major auto manufacturer, GM officials asserted.

The additional capabilities of the expanded lab include equipment dedicated for future development and testing of charger systems, cord set testing and competitive benchmarking; building prototype battery packs for vehicle development programs; and the ability to act as the hub for validation and testing of all battery systems designed for use in future GM vehicles around the world.

Teams will validate and test updates to existing chemistries and system designs to make the most of performance and reduce cost. For example, updates were made to the battery system in 2013 Chevrolet Volt that added three miles of EV range.

(BMW i8 plug-in will offer supercar performance — at a supercar price tag. Click Here for a closer look.)

In addition to the Michigan lab, GM also operates battery R&D facilities in Shanghai, China, and Mainz-Kastel, Germany. By linking the three facilities, GM researchers will be able to collectively test battery systems around the clock to reduce validation time.

“In the past four years, the competitive landscape in the electrification space has grown exponentially. This has required us to raise our game and draw a new line in the sand,” said Doug Parks, GM vice president, global product programs.

That became especially apparent at the Frankfurt Motor Show, earlier this month, where Carlos Ghosn, CEO of the Renault-Nissan Alliance, stressed his intention of maintaining a lead in the emerging battery-car market. The Nissan Leaf currently outsells the Chevrolet Volt by a wide margin.

(Nissan intends to remain the leader in battery-electric vehicles. Click Here for more.)

But Martin Winterkorn, CEO of Volkswagen AG, countered by declaring the German maker’s intent to become the world’s biggest producer of battery vehicles over the next half-decade. VW used the show to introduce a number of plug-based products, including battery-electric versions of two of its smallest models, the new e-Up! minicar and e-Golf hatchback.

GM plans to launch a number of its own new plug models, including the Cadillac ELR, a luxury version of the Volt plug-in hybrid, due to market next year. But it is also looking at a pure battery-electric model that would deliver around 200 miles range per charge – more than double that of the current Chevrolet Spark EV.

Such projects are expected to keep the new Detroit battery lab busy for years to come. But Doug Parks, vice president of global product development said that one of the goals of the new facility is to cut in half the time it takes to develop electrified vehicles like the Volt.